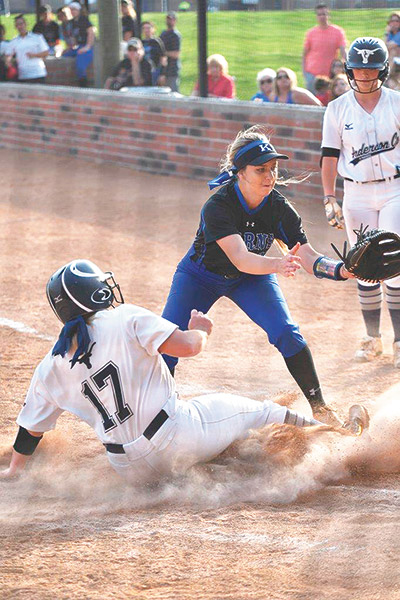 Last Monday, the Lady Mavs hosted Halls—a game that had been postponed halfway through due to rain.

On Wednesday, Anderson County traveled to Powell, and attempted to upset the defending champions for the fourth time this season. Yet, the result was a 3-0 Lady Panthers’ win.

On Thursday, the Lady Mavs hosted Karns on senior night. Anderson County came out of the gates strong, and held a 5-0 lead at the end of the third inning. However, the Lady Beavers came roaring back. Trailing 6-2, Karns erupted for nine runs in the top of the sixth inning, and defeated Anderson County 11-6.

This past Monday, the Lady Mavs traveled to Halls for a rematch with the Lady Devils. Again, Anderson County would give up the lead. The Lady Devils would score two runs in the bottom of the fifth inning to take a 3-2 advantage. The Lady Mavs were unable in answer in the two remaining innings, and fell 3-2 to Halls.

The Lady Mavs did defeat archrival Clinton last Tuesday, but it stands as Anderson County’s lone win in their last five ballgames.

Against the Lady Dragons, Anderson County would take an early lead in the top of the first inning. After a Jada Reeves steal, Malorie Overton stepped to the plate and delivered an RBI-double to left field.

After Emilee Fowler reached on a walk, then both base runners advanced via a wild pitch, Hannah Bruce singled on an error, Overton scored from third, and the Lady Mavs led 2-0.

The ensuing batter was Leah Freeman, who drove the second pitch of the at-bat to left for an RBI-single. Two batters later, Jade Richards reached on an infield single for an RBI, scoring Hannah Bruce, and Anderson County led Clinton 4-0.

The Lady Mavs final run of the inning came from a Kenzie Jones sac-fly to left field, which scored Leah Freeman, and Anderson County headed into the second inning with a 5-0 lead. The Lady Mavs put six more runs on the board throughout the next four innings, for a 11-0 win over Clinton.

In the circle, Hannah Freeman earned the win for Anderson County, and pitched four solid innings. Freeman faced 13 Lady Dragons, and honed in 22 strikes on 34 pitches. She gave up only three hits, no runs, walked one, and struck out one.

Anderson County has three games remaining in regular season play, and will look to close out the season in better form, to gain some momentum for the upcoming District 3-AAA tournament.

The Lady Mavs travel to Union County Tuesday night before hosting The King’s Academy this Tuesday, and a talented Hardin Valley squad this Thursday for the regular season finale. All three games will be good tests before the start of tournament play.