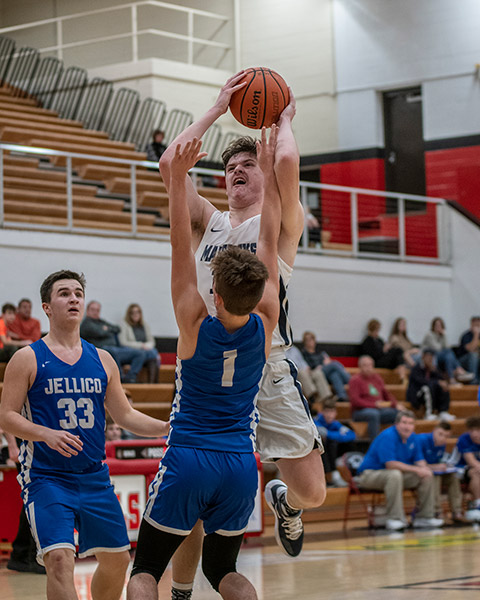 Connor Martin uses his 6’4” size advantage to take a mid-range jumper over Jellico’s 5’10” Gracin Gerber during Friday’s Christmas Tournament game at Maryville High School. The Mavericks won 81-71. (photo:Tony Cox )
Anderson County lost in the third round of its Christmas tournament against William Blount High School. The final score was 50-43.

The Mavericks took an early lead against the Governors in the first quarter before dropping it soon after, requiring them to spend the rest of the game playing catch-up. The Mavs briefly retook the lead in the second quarter before immediately losing it again and staying behind until the end.

The Mavericks capitalized on their turnovers, though, making 15 points off turnovers and finishing with 11 rebounds.

Carter Jett was the star scorer for the Mavericks, finishing with 11 points under his belt. Tied for second with eight points each were Stone Hatmaker, Anthony White, and Nick Reed. Anthony White dominated on rebounds, with a total of seven, followed by Connor Martin, with a total of five.

Nick Reed finished the night with an astound value points system (VPS) score of 2.33, meaning he contributed twice as much positive to his team than his negative contributions.

The clear MVP for William Blount was Cameron George, who scored 17 points and came away with nine rebounds before the end of the game, including two three-point shots.

The Mavericks also played in the Maryville High School Christmas Tournament. Resultes were available for those contests due to th eearly holiday press schedule.