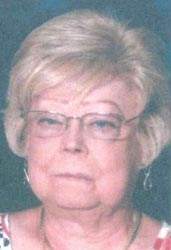 Shirley Fay “Melton” Allaway, Andersonville, born April 15, 1945, in East Chicago, Indiana, passed away Jan. 3, 2021. Shirley was a member of Mt. Pleasant Methodist Church in Andersonville. She’s in heaven with Jesus and her God. She was thankful for all the prayers from her church family, and friends from all over the country. It’s been a long struggle with her heath, especially the last two years. She would like to thank the doctors and nurses that tried to keep her alive. A girlfriend introduced her to her future husband at a bowling alley, called it a perfect strike from Cupid. The couple made their home in Hammond, Ind., and Dyer, Ind. They enjoyed comradery with friends over card games, concerts (Johnny Mathis, Tom Jones, Liberace and Travis Tritt were favorites) and more birthdays, dinners, anniversaries, holidays and Sunday-afternoon visits with extended family than any calendar could keep track of. Shirley and Richard bought a pop-up camper and enjoyed the great outdoors at campgrounds, national parks and recreation areas for many years. When they moved to Andersonville in 2002, they set up a large camper in Norris as temporary “home and hearth” while their house was being built. Shirley and Richard were dedicated Notre Dame fans — donning the blue and gold to attend every home game (and some away) for more than 30 years. They adapted, however, when they crossed that state line into Big Orange Country and became fans of Pat Summit and her Lady Vols. She was preceded in death by: Parents, Clarence and Leona” Stooksbury” Melton; brother, Markel Wayne Melton; mother-in-law, Ruth Allaway; sister-in-law, Carole Groszewski; close friends, Anna Pullen, Diane Krajewki and Rose Horvath. Shirley is survived by: Beloved husband, Richard Lee Allaway; nephew, Lawrence Groszewski; niece, Carrie Colleen Melton; lifelong friend, Carmella Rowe. Per the family’s request Shirley’s services will be private. holleygamble.com