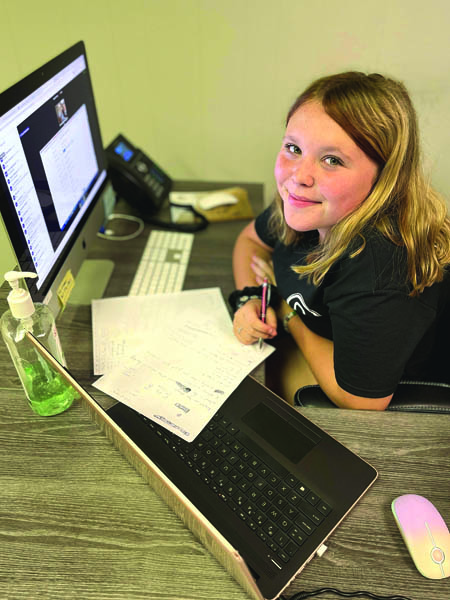 Camper Savannah W.
It’s become a summertime event for young people intrigued by cybersecurity, and the third-annual version of this activity proved as popular as its predecessors.

Roane State Community College again teamed up with the educational outreach program at the Y-12 National Security Complex in Oak Ridge to offer the camps.

The camp for high school-aged students was held in June over four days, and a similar event for middle schoolers was hosted in July. The camps filled up quickly and included two students from Hawaii and one from Santo Domingo.

He’s the director of Roane State’s Computer Information Technology program and is credited with developing a world-class, award-winning cybersecurity curriculum at the college.

Roane State’s cybersecurity program was launched in 2017 and quickly developed a national reputation.

• Rebecca Kolling of Clinton was named to the President’s List.

• Madison Flores of Heiskell was named to the President’s List.

• Kendall Lloyd of Oak Ridge was named to the President’s List.

• Courteney Lovell of Oak Ridge was named to the Dean’s List.

• Olivia Ricche of Oak Ridge was named to the President’s List.

Goethert is among approximately 30,000 students, faculty, professional staff and alumni to be initiated into Phi Kappa Phi each year. Membership is by invitation only and requires nomination and approval by a chapter.

Only the Top 10 percent of seniors and 7.5 percent of juniors are eligible for membership.

Graduate students in the Top 10 percent of the number of candidates for graduate degrees may also qualify, as do faculty, professional staff and alumni who have achieved scholarly distinction.

Austin Peay State University is proud to recognize Nikolas Lamie from Clinton as one of the students named to the Dean’s List for academic achievement during spring 2022.

To qualify for the Dean’s List, students must earn a semester GPA of 3.5 or greater.

Courtney Lively of Andersonville was named to the University of Mississippi’s spring 2022 Honor Roll list.

Lively, majoring in general business, was named to the Dean’s Honor Roll, for students who earn a semester GPA of 3.50-3.74.

Leah Inger of Clinton is a candidate to graduate from Utah State University with a on-degree program/masters in regional campuses distance education.