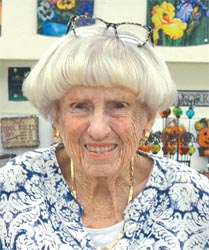 Helen Llewellyn Hammer, 98, Clinton, died peacefully Jan. 7, 2021, at NHC in Oak Ridge. Helen was born in Knoxville to Frank and Margaret Llewellyn. She was a graduate of Farragut High School and it was there that she met the love of her life, A.B. (Bernard) Hammer Jr. She attended the University of Tennessee for a time but chose to marry Bernard and move to Guntersville, Ala., where the original Hammer’s Department Store was established by his family. Helen and Bernard came to Clinton in May of 1952 to stay for a week in order to close out a small store on Market Street that was in bankruptcy. Business was so good; however, that they sent back to Guntersville to get more merchandise. That original one week stay became a lifetime. Helen remained very active in the store throughout the last 68 years as she was featured in the store’s television and radio ads, never missed a buying trip or trade show, and worked every day in the office performing the bookkeeping duties of the company. During that time, she and Bernard introduced the business to their children and grandchildren and allowed them to fall in love with it just as they had. As a result, Helen was never far from the two things she loved most on this earth, her work and her family. Even though these things were her focus, she still took time to invest in her community. She served as president of the Clinton Chamber of Commerce, served on the board of Third National Bank, was an active member of the Timely Topics and Garden Club. She was a longtime member of Andersonville Methodist Church but spent the last years of her life at Second Baptist Church with family. Helen loved traveling, reading and entertaining family and friends. She was a beloved mother, grandmother and great-grandmother. Helen was preceded in death by: Husband, A.B. Hammer Jr.; son, Jeffrey Hammer; daughter, Margaret Calhoun; brother, Buddy Llewellyn and wife Ruby. She is survived by: Daughter-in-law, Billie Sue Hammer and son-in-law, Don Calhoun; grandson, Kelly Calhoun and wife Tanya; grandson, Will Hammer and wife Whitney; grandson, Clay Hammer and wife Ashley; great-grandchildren, Harrison and Matthew Calhoun, Morgan and Millie Hammer, Gabriella and Adaiah Hammer; niece, Janet Schofield; nephew, Rick Llewellyn. The family would like to thank the kind nurses at NHC who cared for her during this difficult time. The family will hold a private graveside service at Andersonville Cemetery at 3 p.m. Wednesday, Jan. 12, 2021, with Dr. Mike Thompson officiating. Helen believed in St. Jude Children’s Research Hospital and the American Cancer Society. The family requests memorials be made to these two charities in lieu of flowers.