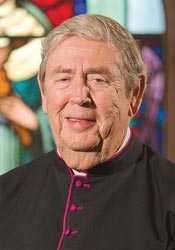 Monsignor William H. Gahagan, a much beloved priest who faithfully served God’s people in Middle and East Tennessee for 52 years, died Jan. 10, 2023. He was 85-years old. Born in Lewiston, Maine, in 1937, he graduated from Lewiston High School in 1955 and enlisted in the U.S. Air Force. Having served overseas in France, he providentially received orders to Tennessee to Joelton Air Force Station, north of Nashville. Tennessee may have seemed as foreign as France to this Maine native, but it was God’s way of introducing him to his new home state where He had big plans for him. When God calls, he knew there was only one way to respond — “Be it done to me according to your Word” (Luke 1: 38). And that’s exactly what Monsignor Bill did throughout his priestly life. His abandonment to God’s Will would take him on a journey of college and seminary formation that would eventually lead him to the altar in 1970 where his, “yes,” to God was consecrated in his ordination as a priest of the Diocese of Nashville, which at the time represented the entire state of Tennessee. Given his parish assignments within East Tennessee, he continued to serve under the newly established Diocese of Knoxville, which was decreed by St. John Paul II in 1988. Early recognized for his great commitment to serving the poor and needy in East Tennessee, he was appointed in 1989 to be the “Vicar of Charities” for the Diocese of Knoxville. Having previously established “Catholic Social Services” and “Columbus Home” in Knoxville, he helped create the umbrella program for what would later become “Catholic Charities of East Tennessee.” Given his many labors of love for the poor and needy, he is considered the “father” of Catholic charity work in East Tennessee. Because his parish assignments spanned the geographic area of East Tennessee over his many decades of priestly ministry, his reputation for pastoral ministry and help to the wider communities in which he lived was widely known. It was said of him that if you were troubled in spirit or in need of any help, his door was the first you should knock upon. And he was always there for his brother priests who he loved so much. His joyful demeaner coupled with his self-deprecating style of humor earned the title of the “Rodney Dangerfield of priests,” which always put people at ease who came to him with their worries and crosses. With a special gift as a caring “spiritual director,” he served as a chaplain to the students and faculty of Knoxville Catholic High School, and to the Catholic Center of East Tennessee State University. He also served in a part-time capacity at the Jesuit House of Prayer in Hot Springs, N.C., as a spiritual director. Monsignor Bill also had a special love and desire to minister to the sick and suffering, serving as a chaplain in the area hospitals of his many assignments, particularly at St. Mary’s Hospital in Knoxville, as well as in Johnson City and Nashville. In 2017, the honorific title of “Monsignor” was bestowed upon him as a “Chaplain to His Holiness” as a member of the Papal Household in recognition of his steadfast and loving service to the Church and her faithful, and to the poor and suffering. His many assignments during 52 years include serving at the Cathedral of the Incarnation and Christ the King in Nashville, as a teacher and chaplain at Knoxville Catholic High School, director of then-Knoxville Catholic Charities, as well as serving as pastor or associate pastor of St. Therese in Clinton and St. Joseph in Norris, Our Lady of Perpetual Help in LaFollette, vocations director for the Knoxville Deanery (when a part of the Diocese of Nashville), St. Dominic Church in Kingsport, St. Mary Church in Johnson City, and St. Therese of Lisieux Church in Cleveland. Though a priest never truly “retires” from the priesthood, Monsignor Bill was eager to continue to serve in any capacity called upon, and he continued to do so even as his health declined. And all who had the blessing to know him knew he had an incredible gift of fortitude, for he was very determined to do his utmost to be the priest God called him to be, and to do whatever he could for others. Truly, he was the face, the arms and the heart of Jesus to all who came to him. Monsignor Bill was preceded in death by: Parents, John and Winifred Kerns Gahagan; brothers, Sonny and Jim Gahagan; and sister, Mary Fournier. He is survived by: Nephew, Michael Fournier Sr.; niece, Linda Doyon; great-nephews, Michael Fournier Jr. and Michael Derosier; and great-niece, Cathy Derosier. The visitation for Monsignor Gahagan will be from 5 – 7 p.m. Monday, Jan. 16, 2023, at St. Joseph Church in Norris. A second visitation will take place at the Cathedral of the Most Sacred Heart of Jesus in Knoxville at 10 a.m. Tuesday, Jan. 17, 2023. The funeral Mass will follow at 11:30 a.m. with Bishop Richard Stika celebrating and will be live-streamed on the cathedral's YouTube channel: www.youtube.com/@shcathedral. Hatmaker Funeral Home located in Lake City, is in charge of arrangements.