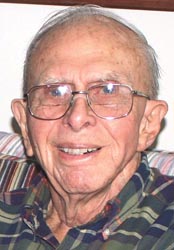 Otto W. Briscoe, 100, Clinton, passed away peacefully Oct. 30, 2020, at Methodist Medical Center of Oak Ridge. He was born Jan. 8, 1920, in Covington, Ga., the son of the late Otto T. and Elizabeth W. Briscoe. He was preceded in death by: Marie, his loving wife of 73 years; sister, Marjorie B. Anthoine and her husband Bob of Fort Valley, Ga.; brothers-in-law, Jerry Williams, Glenn Rauchle, James D. McLean; and sister-sin-law, Sara Williams, Virgie Rauchle, and Sylvia McLean of Milan. Otto graduated from Emory University with a degree in chemistry in 1941 and took graduate courses at Georgia Tech. He worked for the Chemical Warfare Service in Huntsville, Ala., before coming to the Y-12 Plant in Oak Ridge in 1943, where he worked for 40 years as a chemist and department superintendent of the Y-12 Analytical Chemistry Department. In his lifetime, he enjoyed playing basketball, tennis, bowling, fishing, golfing, and was an avid reader. He played golf into his 90s. He made two hole-in-ones and shot under his age multiple times. Former member of the Clinton Lions Club, and an active member of Memorial United Methodist Church where he served as treasurer for 10 years. He was also active in the Wesley Bible Class at Memorial. He is survived by: Son, William (Bill) and daughter-in-law Donna of Oak Ridge; daughter, Mary Wilson and special friend Frank White of Knoxville; and granddaughter, Erin W. Sharp and husband Tim; and great-granddaughters, Avery and Ellanor Sharp, of Powell; and several nieces and nephews. The family would like to express their appreciation to all of Otto’s special caregivers for their loving support. The family request that in lieu of flowers, memorials be given to Memorial United Methodist Church, 323 N. Main Street, Clinton, TN 37716. A private graveside service will be held by the family at Oak Ridge Memorial Park. Holley Gamble Funeral Home in Clinton is in charge of all arrangements. www.holleygamble.com