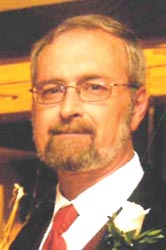 Steven “Steve” Reese Breeden, Claxton, passed away with his family by his side Sunday, Oct. 2, 2022, at the age of 65. He was born to James Franklin Breeden Jr. and Doris Ann Brock Breeden Feb. 17, 1957. Steve was a graduate of Clinton High School class of 1975. He then went on to work as an electrician at Performance Pipe in Knoxville for 45 years. In the 1990s, he served as the president of the Claxton Youth Organization and spent much of his time coaching football and basketball. As the years went on, he enjoyed spending his time with friends and family. Steve was also an avid deer and turkey hunter and enjoyed hunting season as much as possible. He is survived by: Loving wife, Kathy Smith Breeden, of 45 years; two children, Steven Breeden (Brandy) and Vanessa Breeden Fox (Stevie); six grandchildren, Peyton, Reese, Kate, Sydney, Levi, and Easton; sister, Jama Breeden Hill (David); brother, Mike Breeden (Robyn); and stepmother, Vivian Dagley. He is also survived by many in-laws, nieces, and nephews. He was preceded in death by his parents. The family would like to extend a special Thank You to Steve’s cousin, Robert Breeden, and the administration and staff at Life Care Center of Blount County for their care, attention, and love expressed during Steve’s final days. The family will receive friends from 5 – 7 p.m. Thursday, Oct. 6, 2022, with service to follow and Bro. David Watson officiating at Holley Gamble Funeral Home in Clinton. Graveside service will be at 10 a.m. Friday, Oct. 7, 2022, at Riverview Baptist Church, located at 410 Old Blacksferry Lane, Clinton. www.holleygamble.com