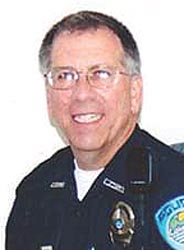 Richard Anthony Foschino, 72, passed away peacefully at his home Saturday, Feb. 8, 2020, surrounded by his family. He was born July 3, 1947, in New York City, N.Y., and moved his family to East Tennessee in 1979. He devoted his career to serving the citizens of Anderson and Campbell Counties during his long and distinguished law enforcement career. Among his many esteemed positions, Richard served as Chief of Public Safety for the City of Norris, Chief of Detectives and Chief Deputy for the Anderson County Sheriff’s Department, Chief of Detectives for the Campbell County Sheriff’s Department, and ultimately retired from the Rocky Top Police Department. Of his most notable accomplishments, he solved multiple cold-case homicides and other major crimes which he later documented in a series of novels. He often balanced his stressful law enforcement career with his artistic side through which he became an accomplished writer and oil painter. He was preceded in death by: Parents, Louie and Julie Foschino; twin sister, Marie; and his beloved wife of 21 years, Vonda. He is survived by: Daughter, Barbara Ridenour (David) of Andersonville; son, Brian Foschino (Shannon) of Gleason; their mother, Anne Foschino of Knoxville; step-son, Cameron Crowder (Ashley) of Briceville; sisters, Nancy Crumley (Muskie) of White Lake, N.Y., Kathy Foschino-Katt (Matt) of Elizabethan, Ky.; and brothers, Allen Foschino, Mountain City, and Steven Foschino, White Lake, N.Y.; grandchildren, Chelsea, Austin, Ashlee, and Mike. He also cherished his four great-grandchildren and seven nieces and nephews. The family would like to give special thanks to Chief Jim Shetterly, the City of Rocky Top, and his long-time partner David Campbell, as well as all his other Brothers in Blue. In addition, we would like to give our gratitude to his Nurse Veronica and the staff at Amedisys hospice. The family will receive friends from noon – 2 p.m. Saturday, Feb. 15, 2020, at Holley-Gamble Funeral Home in Rocky Top, with a memorial service to follow at 2 p.m. with the Rev. Wayne Phillips officiating. In lieu of flowers, donations can be made to the American Cancer Society.