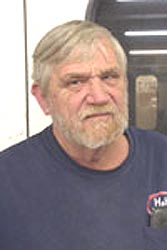 Therrell Fredricks, 70, Clinton, died Monday, May 4, 2020, at Methodist Medical Center of Oak Ridge. He was born March 8, 1950, in Whitley City, Ky., the son of Dallas and Lois Fredricks, who preceded him in death. Mr. Fredricks was a 1969 graduate of Norris High School. He was employed with H&H Body Shop in Clinton, in the Detail and Quality Control Department, where he worked for many years. He was an avid NASCAR fan and a fan of University of Tennessee football, preferring to listen to the radio broadcast of UT games rather than watch the television coverage. In addition to his parents, Mr. Fredricks was preceded in death by: Infant sister; and granddaughter, Jaimie Fredricks. He is survived by: Wife, Laquata Sanders Fredricks; daughter, Wenonah Fredricks; sons he raised as his own, Mark Fredricks (Akiko), Jason Sanders, and Cody Fredricks. Mr. Fredricks is also survived by: Sister, Charlotte Phillips and her husband David; four brothers, Wendell Fredricks and his wife Wanda, Wayne Fredricks and his wife Linda, Jeff Fredricks, and Dallas Fredricks Jr. His grandchildren are Brittney, Heather, Amber, Jeremy, Joshua, Cole, and Camden, who he thoroughly enjoyed the time he spent with them, especially with Camden. He is also survived by four great-grandchildren, Raelynn, Jackson, Mia and Landon; and numerous nieces and nephews. Barry Hutchins and Darla Bayless, co-owners of H&H Body Shop, were considered special friends, as was Lynn Phillips, a friend since childhood. A graveside service will be held at 10 a.m. Saturday, May 9, 2020, at Sinking Springs Methodist Church Cemetery in Clinton. A viewing time will be held from noon to 4 p.m. Friday, May 8, 2002, at Hatmaker Funeral Home in Rocky Top. Hatmaker Funeral Home is in charge of arrangements.