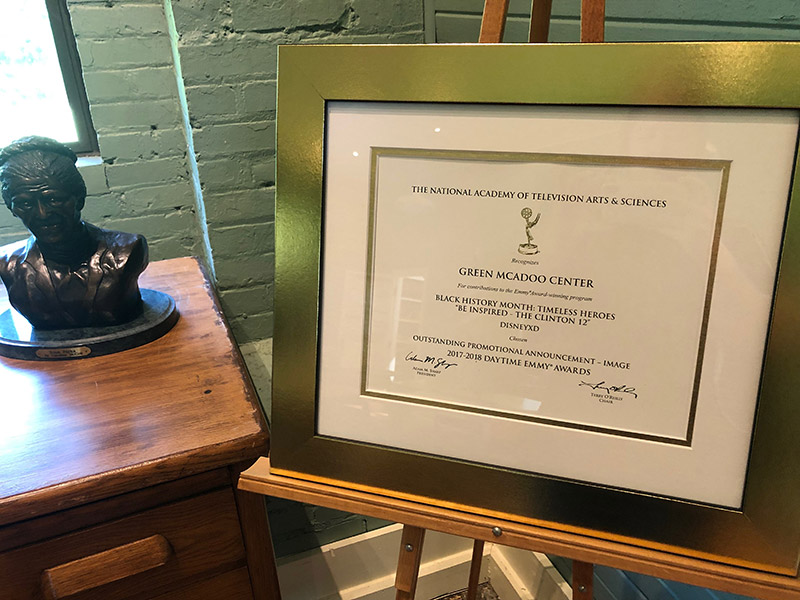 The Emmy-winning short about the Green McAdo Cultural Center was recognized at the ETHS banquet recently.
The East Tennessee Historical Society’s (ETHS) annual Awards of Excellence were presented at the organization’s Annual Meeting on May 14, 2019, at the Foundry on the World’s Fair Site in Knoxville.

Since 1982, the Society has annually recognized individuals and organizations that have made significant contributions to the preservation, promotion, programming, and interpretation of the region’s history. Four Anderson County initiatives were among the 44 awards presented.

Ray Smith was the recipient of a Lifetime Achievement in History Award. For more than four decades, Ray Smith has demonstrated excellence and dedication to preserving, documenting, promoting, and sharing the unique history of Oak Ridge.

Among his many accomplishments is his service as the official historian for both the Y-12 National Security Complex and the city of Oak Ridge.

He has written six books and many articles, as well as a twice-weekly column, “Historically Speaking,” (450+ entries to date) that appears in the Oak Ridger. Ray was deeply involved in the work to create the Manhattan Project National Historical Park, for which he received the U.S. Department of Energy Gold Medal Award in 2017.

James “Jim” Green & Paula Green received the Lifetime Achievement in Living History Interpretation Award. “If you don’t know where you came from, you won’t know where you’re going” was the motto of Jim and Paula Green. With a great commitment to historical accuracy, the husband and wife team shared the region’s history with both young and old through active participation and leadership in the Sons of the Revolution and Tennesseans for Living History. Jim portrayed a Long Hunter. The pair generously shared their expertise and time at a myriad of events, festivals, and student programs. Jim will be missed by many.

Jo Ann Allen Boyce was awarded an Award of Distinction for This Promise of Change: One Girl’s Story in the Fight for School Equality, co-authored by Jo Ann Allen Boyce and Debby Levy, which tells the story of Jo Ann’s journey as part of the Clinton 12. In 1956, the Clinton 12 integrated Clinton High School in Clinton, Tennessee, which became the first desegregated state-supported high school in the South. Jo Ann recalls her time as the spokesperson of the group and the dangers they faced in what would become a historic event.

Julia Hopper Daniel was the recipient of a Community History Award. As a fifth-generation descendant of former slave Adeline Staples Crozier, Julia Daniel often shares her story, and those of others, to inspire her home community of Oliver Springs and beyond. Julia is president of the Mayme Carmichael School Organization, whose mission is to preserve the heritage of the African American community and promote education. She has also been key to the development of the Tri-County African American Museum.