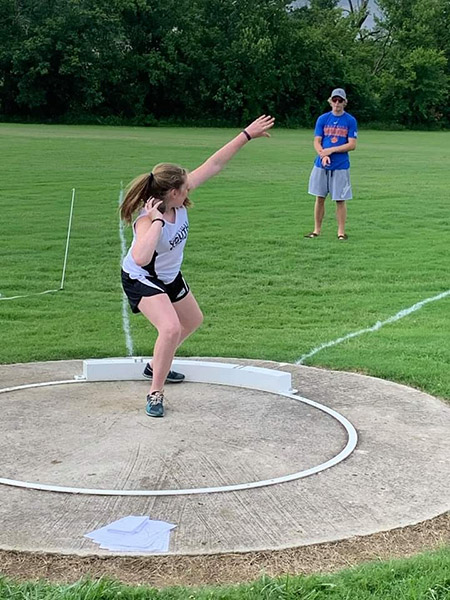 It didn’t take her very long to find it.

In the Sunshine State, Hutchison’s sports passion was karate. She came to Clinton with a Junior Olympics appearance in hand and when she moved north, she didn’t have much to do to earn her black belt.

She came here with intentions of earning her belt but travel and limited dojo time made the strain too much for the 11-year old rising Clinton Elementary School sixth grader,

“I was going to finish my black belt, but because of the travel time, I couldn’t get enough time in the dojo,” Hutchison said. “You have to teach, so I decided not to finish it.”

Well now, Hutchison is a track and field star for the Clinton Lady Blaze, which recently completed the first season in program history last spring.

But the Blaze and Lady Blaze aren’t resting on their laurels this summer.

Many of the program’s athletes are competing in the Knoxville Youth Athletics summer program and Hutchison has qualified for the upcoming AAU National Championships in Greensboro, North Carolina later this month.

She’ll compete in both the shot put and discus events at that meet, which will begin later this month.

In the recent AAU Region 6 Championships in Knoxville, Hutchison finished third in the discus with a throw of 47 feet, 5 inches. Her mark in the shot put was 16-06. That netted her sixth place and a spot at nationals.

But Kenzlee doesn’t take anything for granted.

“I feel really fortunate,” said Hutchison, who is also a stellar student, who made straight A’s last year. “There are a lot of people who don’t get the opportunities that I have,”

She wasn’t planning to compete in the shot put, according to her mother, Mackenzie, and employee for Clinton City Schools.

“We had two track meets this year. We had one put on by Knoxville Youth Athletics and then, we had one put on by the Blaze,” Mackenzie said. “I don’t know if she would tell you this but, she decided to do the shot put after she threw it further than all the boys but one.

“We were looking for something to replace karate and we found it. We haven’t been here that long, but she’s found her place.”

Kenzlee, who also plays Upward Basketball, will compete on the cross country team this fall but CCS athletics director E.T, Stamey is looking for her to do more.

Namely, play for the Lady Blaze basketball team, which had a historic second season, going 17-4 in 2018.

He’s approached Mackenzie about Kenzlee playing on the hardwood for the Lady Blaze later in the fall.

She’s played well in Upward according to her mother and Stamey said her game can only improve under coaches Christin Webb and Lauren Murphy.

Webb is a former head coach at Powell High School and Murphy played basketball through middle school before opting to concentrate on softball. She also serves as an assistant softball coach under Lindsay Rakes at Knoxville Catholic High School. Murphy’s father is a longtime middle school coach in Oak Ridge.

“E.T. is trying to get her to play [basketball for the Lady Blaze],” Mackenzie said. “We’ll see.”