‘Meet the Mavs’ was a night to honor everything ACHS 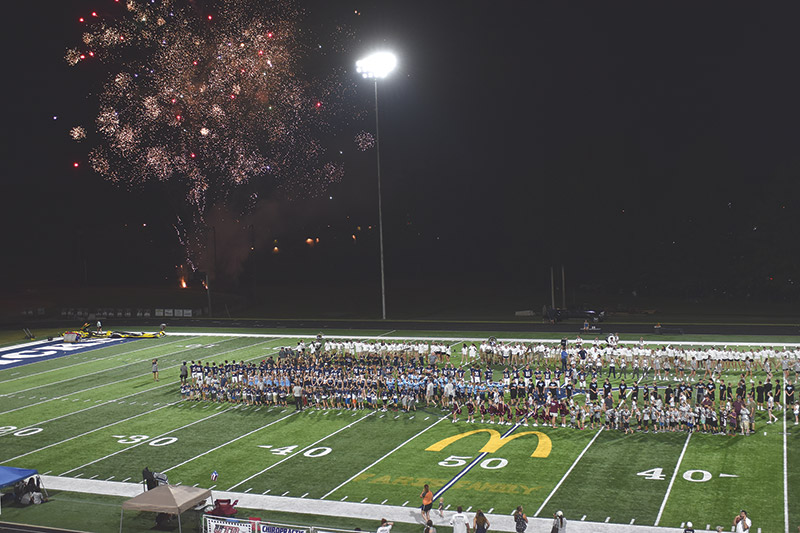 Anderson County High School welcomed everyone to Meet the Mavs last Friday and showed off why ACHS is a special place to so many. (photo:Collin Riggs )
It was sunny and hot on Friday afternoon when the tents rose and the tables were dragged out to set up the booths for Anderson County’s annual Meet the Mavericks.

A band played by the ticket gate, greeting people as they streamed past. The music floated out across the field to mingle with the murmur of a hundred conversations and the smell of cooking meat from the food trucks.

At the far end of the football field, bouncy castles and games were set up, along with a waterslide that kids and adults alike took advantage of.

Pop-up pavilions lined the sides of the field, and under each one a team from the school sat together, talking to passersby, shaking hands, selling pizza or keychains to raise money.

At the 50 yard-line, the senior football players sat at a table signing autographs for kids and letting them throw footballs into a net.

At 8 p.m., the tents were swept away to clear the field.

All the players, old and young, gathered together on the side of the field while the parents and the brothers and sisters took their places in the stands.

One-by-one, the youth leagues walked across the field.

Anderson County football has reached the playoffs in 23 seasons out of the 35 it has played since the school’s founding. They have, for the past two years, gone undefeated in their region.

After every team had walked across and stopped for the applause that was their recognition for all their hard work, their early mornings and late nights spent sweating and working, the youth sports came together off the wings to join the high-schoolers and the band, the players of today and the players of tomorrow, and the crowd in the stands sang “Sweet Caroline” while fireworks flew.

The crowd and the stands and the whole stadium hummed with a familial electricity so rarely found outside the world of sports, and served as an amazing reminder of why sports are so important not only to the kids that play them, but to the community at large.