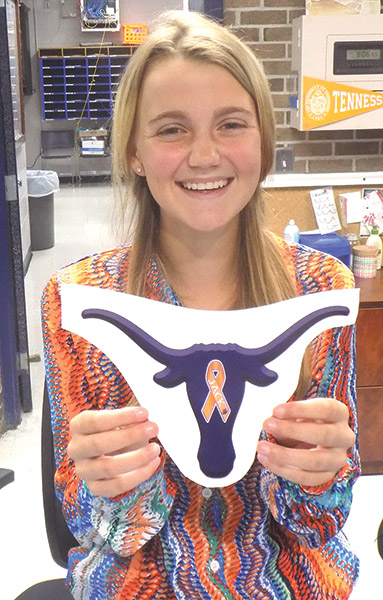 Anderson County High School senior Gywneth Fagan holds a decal displaying the school’s support for four-month-old Jack Price of Campbell County, who is being treated for leukemia at East Tennessee Children’s Hospital. (photo:Fred Strohl )
More than $1,700 was raised by the beginning of this week at Anderson County High School to help the family of Jack Price -- the four-month-old son of Justin and Traci Price of Campbell County — who was recently diagnosed with leukemia and is being treated at East Tennessee Children’s Hospital in Knoxville.

Selling Maverick decals with Jack’s name on them, $500 was raised in-school last week before sales in the stands at Maverick Stadium during Friday’s AC-Hixson football game resulted in more than $1,200 collected.

Once the PA announcement was made announcing the effort, it was only a matter of minutes before spectators rose to the occasion to buy out the entire supply of decals.

“It shows the wonderful generosity of our folks here in the Anderson County High School community,” said school principal Ben Downs. (Assistant principal) Travis Freeman and myself delivered the first $500 to Justin and Traci at Children’s Hospital Friday afternoon before the game and we are looking forward to delivering at least another $1,200 to them.”

Justin Price played football at Anderson County almost 20 years ago, along with his twin brother Matt. Justin and Matt were later assistant coaches at Anderson County before moving to Campbell County High School, where Justin is head coach and Matt is one of his assistants.

Justin and Traci are staying with Jack at the hospital during his treatment, which is expected to take several months.

Prior to the leukemia diagnosis, Jack underwent surgeries for a cleft lip. Upon learning of the leukemia, the Campbell County community rallied to support the Price family with several different activities.

“Even though they are no longer here, we still consider the Price family part of our school’s family and we want to do all and anything we can to help them during this time.”