New retail venues on the verge of becoming reality 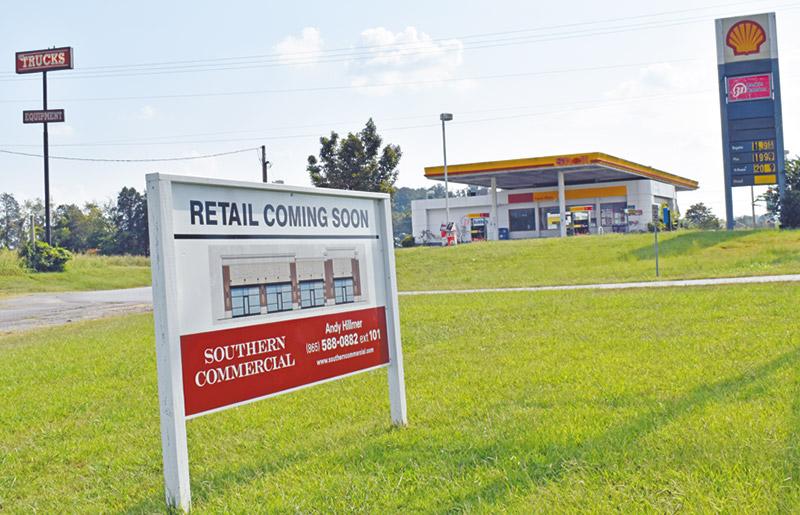 Developers of this site on the south side of North Charles G. Seivers Boulevard near Interstate 75 Exit 22 are plan- ning to break ground late this year on one or two new businesses -- most likely restaurants -- they said. The connection of Sinking Springs Road to Charles G. Seivers will be realigned once approvals are obtained. (photo:G. Chambers Williams )
More retail and restaurant businesses should begin popping up soon on North Charles G Seivers Boulevard at Sinking Springs Road as the developer of a 16-acre tract hopes to break ground on one or two projects in December.

What businesses are going onto that site hasn’t been revealed yet. But a separate unrelated project will bring a new Tractor Supply store next to Fox Toyota on the opposite side of Interstate 75, just east of Exit 122.

The 16-acre development known as Project Black Horse includes most of the land between two Shell gasoline stations – one of which has been closed for the past couple of years – including at least two lots fronting on Charles G. Seivers. It’s about a half-mile west of Exit 122.

There are four parcels nearly ready for development, including the former Shell convenience store site that also housed a Baskins Robbins ice cream shop, said Andy Hillmer, principal broker for Southern Commercial LLC of Knoxville, which is overseeing the project.

On Monday night, the Anderson County Commission approved tax-incremental financing (TIF) of $1.25 million for infrastructure at the site for the developer, Black Horse Capital Partners. The group was represented at the meeting by Knoxville attorney Josh Bishop, one of the partners.

The commissioners also approved a TIF of up to $3 million for the Tractor Supply store, which will be in a planned new retail center next to Fox Toyota.

No schedule has been announced yet for construction of the Tractor Supply building, and no representative of the company or developer spoket at the County Commission meeting.

As for Project Black Horse, the only holdup in signing at least two initial tenants and getting construction underway is obtaining necessary approvals, including for the developer to realign Sinking Springs Road where it connects with Charles Seivers, Hillmer said.

The current alignment has Sinking Springs crossing diagonally over one of the plots the developer intends to build on.

“We hope to get approvals from the city and county this month, get our grading permit next, and have one or two retail buildings coming out of the ground by the end of the year,” Hillmer said.

Clinton City Manager Roger Houck said Tuesday that the City Council will vote on second reading next Monday on an ordinance to annex a small part of the Black Horse property that’s not yet inside the city.

After that receives final approval, Project Black Horse’s plans need to be approved by the Clinton Planning Commission, which could take place in October, Houck said.

No tenants have yet been signed, but some are waiting for the final approval of the road realignment before deciding to locate on the site, Hillmer said.

“We’re negotiating with a number of tenants,” Hillmer said. “But we’re kind of handcuffed until we get our plans approved.”

While Hillmer would not say what businesses might be looking at the site, he did say he has been in contact with several potential tenants, including Chick-fil-A and Dairy Queen.

Whether those two are giving the location any serious consideration is a mystery at this point, but social media buzz recently has supported having one or both of those companies coming to the site.

Hillman said he also knows that people in the area would like to have more choices for casual dining. “Hopefully we will be able to find more of a sit-down restaurant for one of the sites.”

There is a larger piece of property – about eight acres -- behind those four initial lots that Hillmer said would be suitable for a big box retailer such as Lowe’s or a supermarket, or even a “mid-box” tenant such as an Aldi market.

“We’d love to have a Lowe’s or a grocery,” Hillman said. “We haven’t been able to gain any traction. We’ve talked to Aldi. It would be a great place for Aldi. But everyone moves so slowly. The gist is we’re working with a handful of tenants. The door’s wide open as to what we can do back there.”

The larger parcel might end up as a combination of retail and office, including medical offices, or an apartment complex or hotels, Hillman said.

Southern Commercial was the developer for the center just across Charles Seivers that includes Firehouse subs and the Petros restaurant, and also for the medical offices on nearby Frank Diggs Road, Hillman said.

“This whole interchange feeds from Norris Lake, Norris and Andersonville,” he said. “When I’m coming down from Lexington (Kentucky), it’s a good stop before you get to Knoxville. A lot of businesses are moving into Clinton, and the industrial parks are full.

Hillman said the proposed realignment of Sinking Springs Road and the eventual extension of it to North Park Drive will be beneficial to the area.

“These road improvements are going to help a lot with traffic flow,” he said.

Houck said the city is on board with the road realignment, which would have Sinking Springs coming onto Charles Seivers across from Doe Run Boulevard.

The city plans to ask the Tennessee Department of Transportation to install a traffic signal at the intersection, Houck said, which would also help residents of the Hunters Trail subdivision on Doe Run.