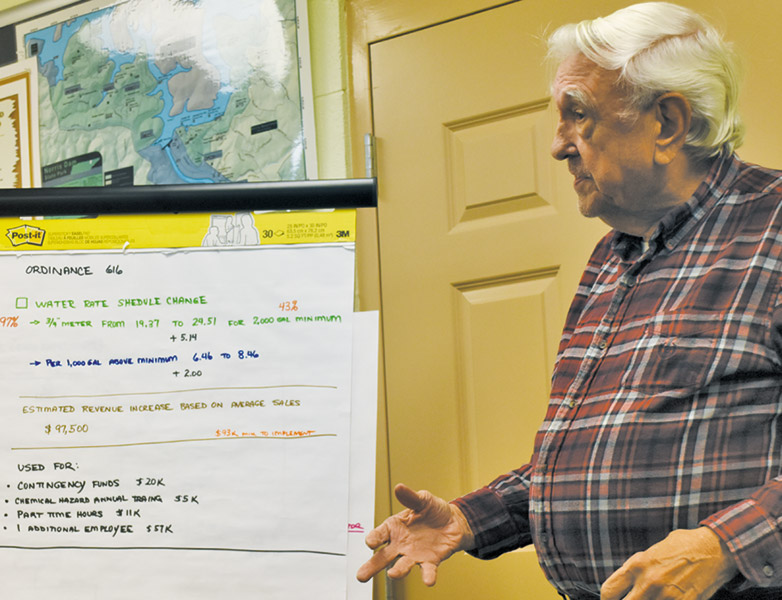 Dean Harshbarger, chairman of the Norris Water Com- mission, explains water-rate options to the Norris City Council during the council’s November meeting on Friday, Nov. 15. (photo:G. Chambers Williams III )
Norris water bills will go up about 25 percent in January if the Norris City Council in December passes on final reading an ordinance it gave unanimous preliminary approval to last week.

The council approved the ordinance as submitted to it by the Norris Water Commission through City Manager Scott Hackler. It would raise the typical water customer’s bill to $24.21 (plus 9.75 percent sales taxes) each month for the first 2,000 gallons, up from the current $19.37. About 43 percent of the city’s 775 water customers now pay that minimum, city officials said.

Those who use more than 2,000 gallons of water a month would see their rates for each additional 1,000 gallons or portion thereof rise to $8.46 from the present $6.46.

A public hearing is set for 6:30 p.m. Monday, Dec. 9, in the council chambers at the Norris Community Center, prior to the council’s regular December meeting at 7 p.m.

During the council’s November meeting, held last Friday after being delayed by the Veterans Day holiday, the council heard from Norris Water Commission Chairman Dean Harshbarger, who sought the approval of the new rates to help cover a projected shortfall in the city water budget.

“We do our best to keep the rates low,” he told the council members. “But our main objective is to keep the water and sewers flowing. … Even with this rate increase, we’re still lower on our water rates than the Anderson County Water Authority and our neighboring municipalities.”

Mayor Chris Mitchell noted that the Water Commission had worked through its budget during a series of special workshops to come up with a plan to keep it in the black.

“The work that has gone into this makes me confident in it,” he said of the proposed rate increase.

“That’s why I support it. I’m comfortable with it.”

For the minimum-use customer, the increase would amount to about $60 a year, Harshbarger said.

New budget items the Water Commission approved at a special meeting Nov. 4, totaled just over $93,000 a year, including $57,000 for a new fulltime employee, $12,000 more for part-time worker pay, a $20,000 contingency fund, and $5,000 for training of staff members on handling of dangerous chemicals.

To cover those extra expenditures, the proposed rate increase is expected to generate about $97,500 annually.

In other business Friday:

The council agreed to participate in the bidding process for a surplus parcel of land being sold by the Tennessee Department of Transportation in front of the Covenant Life Church, which might be used for a city arboretum if Norris chooses to acquire the property.

But some representatives of the church appeared at the meeting and expressed “disappointment” with the city for considering the purchase of the lot, which the church officials said is used for “egg hunts,” even though it is not church property.

The council decided to say “yes” to a query from TDOT as to whether the city was interested in bidding on the land, so Norris could have options later as to what might happen with the property.

If the city had told TDOT that it would not be interested in bidding, then Norris would have had no say in what happens with the lot, other than under its zoning regulations.

TDOT has indicated that it intends to sell the property to the highest bidder after a survey and appraisal of its value are completed.