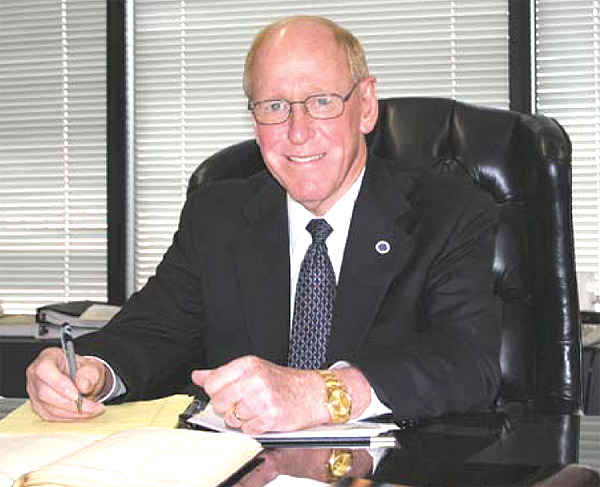 Charles G. “Bones” Seivers
If you live in the city of Clinton, then you know who Charles G. Seivers is.

The city of Clinton, some say, would not be what it is today if not for his stewardship in the 1970s and 1980s.

Bones was born on March 30, 1934, in Clinton, to the late James “Mack” Seivers and Hassie England Seivers.

It’s not just the community center or the boulevard that people will remember him by.

“Bones dedicated his life to the city of Clinton even after retiring in 1993,” Clinton City Manager Roger Houck said.

“He will be greatly missed by the city as well as by me personally.

“I owe Bones not only for my career with the city, but also for my family. If not for Bones and the Twins cafe, I would not have met my wife in 1990,” Houck said.

Charles G. “Bones” Seivers has advanced Tennessee municipal interests for the past 50 years.

A native of Clinton, he entered public office in 1962 when he ran for an open alderman seat. Seivers continuously served the citizens of Clinton with distinction as an elected official for 13 years. He served four two-year terms as alderman; and in 1970, he was elected mayor.

During Seivers’ mayoral term, a committee of citizens, former mayors, and the Board of Mayor and Aldermen determined that the city needed a full-time administrator. Seivers was appointed to that position in 1972. He left his career as process supervisor at Union Carbide to take on the job of the city’s first full-time administrator. During his 20-year tenure, he secured an excess of $17 million in state and federal grants.

A remarkable network who is steadfastly dedicated to advancing the community’s interests, Seivers became involved with the Tennessee Municipal League (TML) immediately following his first municipal election in 1962.

The Tennessee Municipal League made history in 1979 when it founded America’s first statewide municipal liability pool. Seivers was one of the forward thinking city leaders who served as one of the founding members on the TML Insurance Pool Board of Trustees.

Recognizing the need for municipalities to obtain low-cost financing for capital improvement needs, Seivers brought municipalities and the state together and helped create the Tennessee Municipal Bond Fund (TMBF) in 1985. He subsequently served as chairman of the board for the first eight years of its existence.

In 1990, after 28 years of resolute service to the League, Seivers was elected as only the third city manager to ever serve as president of the Tennessee Municipal League.

Upon his retirement from the Town of Clinton in 1993, he continued to serve municipalities as President and CEO of TMBF. In 1995TMBF was asked by the Tennessee County Services to structure a similar program for counties, resulting in the formation of the Tennessee County Services Loan Program (TSP). Now, after 25 years. TMBG and TSP have loaned 1,000 loans totaling $3.4 billion and having saved cities and counties $400 million in interests costs alone.