The Black and Orange Crush 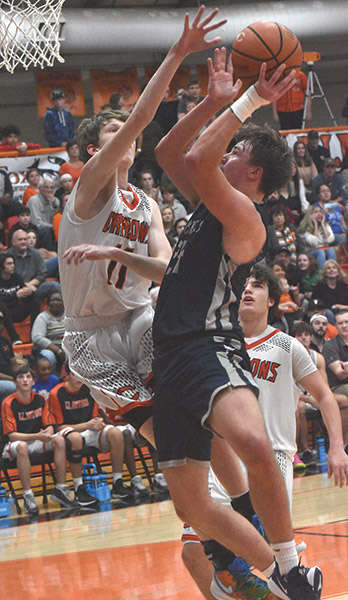 The final scores for the girls and boys were 74-25 and 67-43 respectively, both in favor of the Dragons.

Before the games even started, the night was interesting. After a speaker malfunction, officials couldn’t get the national anthem to play. Rather than give up on the tradition, though, and with the flags already standing at attention, a lone audience member stood from the stands and began singing it.

Slowly, the rest of the stands joined her until the entire gym was singing the anthem.

After that, it was the girls’ turn to play. The Mavericks put up a solid fight and managed to keep the score close until the start of the second quarter, finishing the first quarter down by only two points, but the differences between the two teams became increasingly apparent as the game wore on.

The biggest of those differences was a simple height difference, with Anderson County’s girls paling next to Clinton’s tall and generally all-around-bigger players. Multiple times throughout the game, a Lady Mav got completely trapped by a Clinton player who cut off the passing game. In that same vein, the Lady Dragons had a significant advantage intercepting passes and blocking shots by the Lady Mavs.

Of course that’s not something the Lady Mavericks have any control over, but in games where the difference is as stark as it was between Clinton and Anderson County, it’s a major factor in the play of both teams.

After the girls finished, the guys took their place on the court.

For the first two quarters, the game seemed evenly-matched, with the score see-sawing between the two teams. Unfortunately for Anderson County, Carter Jett and Eli Varner, two of the primary ball-handlers, each pulled his third foul in the second quarter.

With two of the primary handlers close to fouling out and Connor Martin, one of the Mavericks’ best scorers, effectively rendered moot by Clinton’s Trace Wandell, Anderson County couldn’t recover the momentum from earlier in the game.

On top of the game itself, Clinton’s gym was packed with roaring fans, and, after a fight halfway through the second quarter that one could argue wasn’t properly addressed by the officials, Anderson County went into the second half rattled and couldn’t get its groove back.

Stats for the night tell a story of a one-sided game, with Anderson County only managing a 30.4-percent effective field goal percentage to Clinton’s 47-percent. Clinton stole the ball eight times, and made 23 points off AC’s turnovers, while Anderson County pulled 19 personal fouls before the end of the night. With some of the best shooters locked down, Anderson County also only made three three-point-shots the entire game.

Clinton’s top scorer for the night was Chase Lockard, followed by Evan Winchester, who only played 18 minutes of the game, his shortest of the season. In stark contrast to the Mavericks, the Dragons almost all scored positive on their VPS stats, with Trevor Bryant and Rishon Bright finishing the game with a 1.83 and 1.8 respectively.

Derek Wallace, the head coach for the Mavericks, is taking the loss in stride.

“They outplayed us, man,” he said. “You have to give them credit where it’s due. I think we were playing well and then Carter Jett and Eli got their third foul in the second quarter and we lost our rhythm and just never got it back. And they were without Evan Winchester for a lot of the game, but they just have a better backup plan when their people are in foul trouble. We didn’t really respond well.”

Coach Chris Lockard, head of Clinton’s basketball program, said there were things he liked, but there’s always room to improve.

“I think, looking at the overall picture, we played primarily without Evan Winchester, and we were still able to keep the tempo together,” he said.

“I really thought one of the top performers, if not the top performer, for us was Trace Wandell, even if it wasn’t noticed by anyone in the bleachers. He had one job and that was to keep Martin out of their scheme and he kept Martin at zero the whole game.

“We had some great individual performances, but I think that that was one of the primary reasons for us being able to win. It’s awfully early in the season for each kid to be accepting individual roles for different games, but we’ve got some seniors and I think each player has started to understand, ‘Hey, my role can change every game and if I buy into that role, we’re going to be successful.’”

Still, there’s little rest for both teams as they play division heavy-weights this week.