Clinton Wins Out Against Halls in Overtime 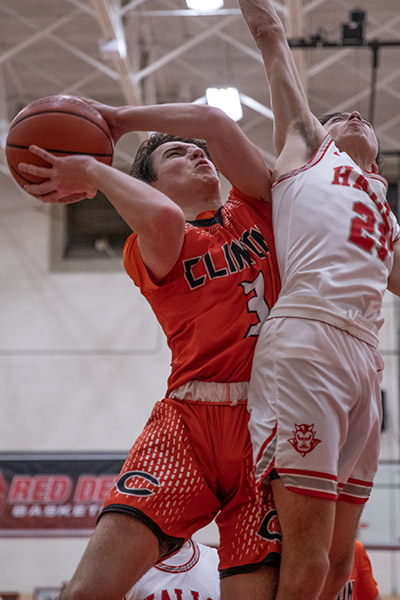 Jackson Garner jumps for a shot against a Halls defender
Clinton nearly snatched defeat from the jaws of victory in their game against Halls after allowing the Red Devils to go on an unchallenged nine-point streak.

Clinton travelled to Halls to face off against the Red Devils in a nailbiter of a game where Clinton came out strong after their holiday break.

Clinton gave a strong start, scoring a phenomenal 19 points in the first quarter against the Red Devils and taking an early lead that they struggled to hold on to for the rest of the game. They were outscored for the next three quarters, culminating in a nine-point hot streak during the third quarter that put the two teams flush with one another for the first time the entire game.

It looked as if Halls might mount a comeback when they took the lead for the first time in the fourth quarter, but Clinton shook itself out of its stupor long enough to tie it up again, sending the game into overtime. During overtime, the Clinton from the first quarter showed up again as the Dragons scored 10 unanswered points on the Red Devils, leaving the final score 66-56.

A tenth of a percentage point… yeah, it was that close.

Where the Dragons did outshoot the Red Devils, though, was free-throws, and they certainly got more changes to do so, as the Devils finished with 13 personal fouls to Clinton’s nine. Out of Clinton’s 10 chances, they made seven. The Devils only made two free-throws out of five. Since the Dragons only won by 10 points, it’s safe to say those extra points played a significant part in the game.

The lead scorers for the Dragons were Jackson Garner and Evan Winchester with 19 and 17 points, with Chase Lockard in a firm third place with 11. Winchester finished with six assists as well.

Coach Lockard admits the team could have been better, but admits, “a win is a win.”

“I didn’t feel like we played very well, and didn’t execute well. It was our first gme back after the break, and we were just a little out of sync. Halls played extremely good, especially defensively. During overtime, though, things started clicking again. It’s still a win, but it was definitely a battle.”

Still, Lockard says it’s been really good to see the younger guys step up in the past few weeks.

“Our seniors are playing a little more consistent, but I’m really pleased with our sophomores. They’ve really started to emerge and step forward as being major ingredients to our success. Obviously, Jackson Garner has been doing that for us for a long time now, but Trace Thackerson and Lane Harrison have really stepped forward for us.”