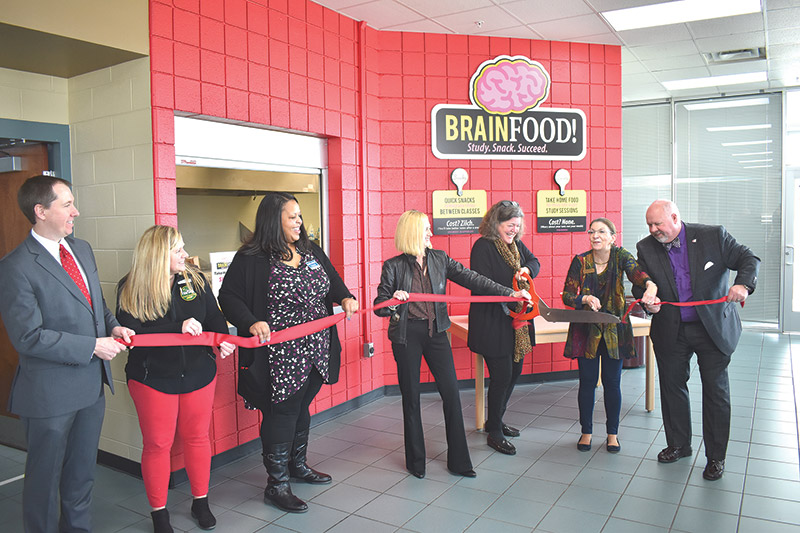 That’s the message delivered by Dr. Chris Whaley, president of the community college, during the formal opening of the “Brain Food” Pantry on the college’s Oak Ridge campus.

Some 40 percent of college students nationwide “struggle with hunger,” Whaley told the crowd attending a ribbon-cutting in the former Anderson Grille in the campus’s Coffey/McNally Building.

Making sure students – and their families – have proper and adequate nutrition “is as much a part of student success as what happens in the classroom,” said Karen Brunner, the college’s vice president of institutional effectiveness and research.

It’s simply the right thing to do, she added, and helps students not have to worry about food.

Roane State is partnering with the First Presbyterian Church of Oak Ridge, which serves as the nonprofit agent to acquire a variety of nonperishable food items at cost from another nonprofit, the Second Harvest Food Bank of East Tennessee, located in Maryville.

“We stand before you as a partner to help alleviate hunger,” said Sue Byrne, a member of the church who serves as assistant project manager for the effort.

“These are successful people experiencing a short-term financial crisis,” she said of students benefiting from the college’s food pantries.

A similar pantry is on the college’s Cumberland County campus, and Roane’s State’s other campuses have initiatives to address student nutritional needs.

Byrne said the “Brain Food” pantry had a soft opening in mid-October. Already, she said, 417 people have been reached with its services, including 117 children.

The pantry will be open Wednesdays and Thursdays once a month; from 9 a.m. until 1 p.m. on Wednesdays and from 4 p.m. until 6 p.m. on Thursdays, said Sandy Vann, a Roane State administrative assistant overseeing the pantry.

Ready-made bags of food – enough for several meals – will be provided as take-home food for student meals and can include canned meat, spaghetti, vegetables and macaroni and cheese, Vann said.

The college also provides quick snacks for students in the “Brain Food” pantry from 8 until 11 a.m. Monday through Thursday. Members of Roane State staff have been giving donations of nonperishable, individually-packaged, single-serve food items to stock the snack bar.

Donations can be dropped off with Vann in Room A-104 of the Coffey/McNally Building; faculty secretary Mariella Akers in B-110; or with receptionist Gail Powers-Blanton at the front desk. Financial contributions for the pantry are being accepted by the Roane State Foundation. For more information, call 865-882-4507.