Senior baseballer is hoping his last season will be a reality 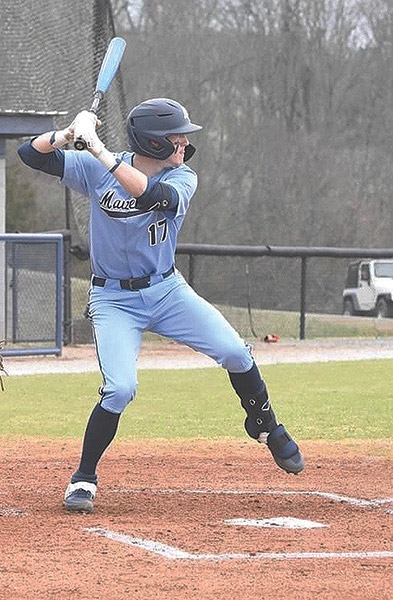 Anderson County senior Maverick baseballer Tyler Phillips at the plate in one of the few at-bats he had before the 2020 diamond season was put on hold.
Everyone is stuck inside and in the era of social distancing, sports are a no-go. It’s hard to stay six feet apart when you’re fighting for control of the same ball.

For younger students, it’s frustrating, but understandable. After all, there’s always next year, right? If one only plays recreationally, then – again – it’s frustrating but the sport will always be there after all of this is over.

There’s a specific group of people, though, who have been hit particularly hard by the shutdown affecting all sports currently: seniors. With it looking less and less likely that there will be any more games played this school season, their last year of playing has evaporated in front of them.

One of those is Tyler Phillips, a senior baseball player from Anderson County High School. This would have been Phillips’ fourth year playing for the Mavericks, and it’s been a frustrating experience. Still, he’s holding out hope that he’ll still get to play.

“I’m working out every day and hitting off the tee and stuff,” he said. “I run, and I’m trying to do as much as I can at home with push-ups and stuff. I’m definitely keeping hope that it’ll come back.”

The team has stayed in contact throughout the quarantine as well, continuing to talk and support one another.

Philips said that the shutdown is affecting everyone differently.

“I think [the team] is staying optimistic, keeping their hopes alive, but it’s tougher on some than others,” he said. “The seniors are the ones having a harder time, for sure.”

The Mavericks had a good start to their season, beating Karns and Pigeon Forge before the shutdown, and that promising start makes the untimely end that much harder to bear.

“I knew that we were a young team,” Phillips said. “But I definitely felt that we had a lot of potential and we were starting to heat up as we were playing. I thought we had a good chance of winning the district this year.”