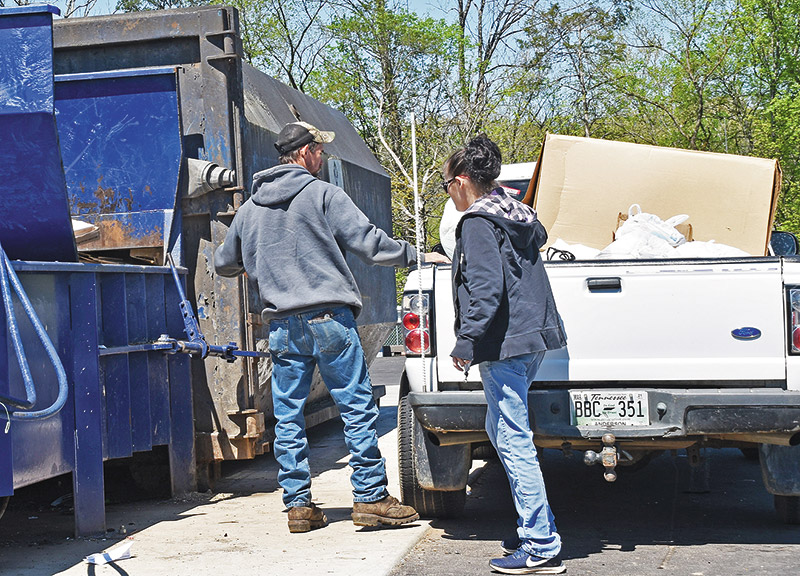 A truckload of trash is unloaded into a Dumpster at the new Glen Alpine Convenience Center on Norris Freeway in Norris on Friday, April 10.
Your solid-waste disposal services need your help.

With so many people tucked away in their homes during this coronavirus crisis, there’s a lot of deep and thorough spring cleaning going on – perhaps the better term is de-cluttering.

And with that happening, people are putting tons of discarded household, garage and basement junk either out at the curb for trash collectors to pick up, or they’re loading up their vehicles and taking all this stuff to the county convenience centers or the Chestnut Ridge Landfill.

Either way, this zeal to clean out your homes and garages has literally created a big mess for trash haulers and the facilities where people are taking all this junk.

“Time out!” the haulers and the trash collection facilities say.

“Until this stay-at-home order ends, we have to ask people to hang on to anything except their regular household garbage. For the past two weeks, our volume of shipments going up to the landfill is double what we normally do.”

City and private residential trash haulers are not picking up the extra trash people are putting out right now, either.

“The cities are all shutting down anything but garbage, and they’re not picking up bulk items or brush right now,” Trabalka said. “We’re trying to work toward that, too.”

In Clinton, private hauler Waste Connections put its coronavirus response plan into effect more than two weeks ago, and is not picking up anything that is “not tied up in a bag and put in a garbage can,” said Clinton City Manager Roger Houck. “They will not pick up stuff piled at the curb.”

Additionally, Clinton postponed its regular April “Spring Cleanup Day” until at least May 7, Houck said. This is the time each year that the city’s Public Works Department picks up spring cleanup items at the curb, except for major appliances.

Dependable Disposal Service, run by John and Jennifer Hutchins, picks up trash weekly from residential customers in areas of Anderson County outside the cities, and it, too, has been seeing a huge amount of trash put out at curbside.

“There’s a lot of junk cleanout going on,” said Jennifer Hutchins, who also is a Clinton city police officer. “People are cleaning out garages, basements and closets, throwing away clothing, toys, plastic kitchen cups, you name it. They’re also putting out grass clippings.

“But right now we can just take tied-up garbage bags that will fit in our 96-gallon trash cans. We’ve even had people load up trailers and park them for us to pick up. We can’t afford to do that; we have to pay dump fees, and we get charged by weight. DDS, as her company is known, charges only $20 a month for regular weekly residential trash pickup.

Trash pickup in Norris is handled by Waste Connections, and City Manager Scott Hackler said the company is only picking up bagged garbage in trash cans there, as well.

“Our spring cleaning pickup has been postponed indefinitely,” Hackler said. “The only thing the city is picking up now are the recycling containers.”

“We were ahead of the curve,” he said.

For now, though, Rocky Top – which does its own residential trash pickup – is allowing only bagged trash.

“We’re avoiding loose trash, unless it’s in a can,” Foster said. “And our guys are taking extra precautions, wearing gloves and masks.”

Anderson County Mayor Terry Frank said last week on Facebook that “We’ve learned when you stay apart and stay at home in accordance with CDC guidelines, apparently you are a hard-working group and you are cleaning out your closets, your sheds, and your garages.”

She said the convenience centers are overwhelmed, and she suggested that people space out their visits to the centers.

“Be patient if bins are full, because we are seeing a tremendous increase outside our normal loads,” she said. “Also, a lot of you arrive on Friday or Saturday. If some of you could maybe change your schedule to Tuesday, that is literally the slowest day of the week at the centers. It’s almost like nothing but crickets chirping sometimes.”

She added: “I want you to know that our folks aren’t slacking. They are showing up to work every day during this COVID-19 event to make sure you’re taken care of. Like many I’m thanking on this page, our Solid Waste Team does an amazing job, especially for being a small, tight knit team. I am so thankful for these great men!”