Market Street bridge, I-75 off-ramp work facing delays, but not from COVID- 19 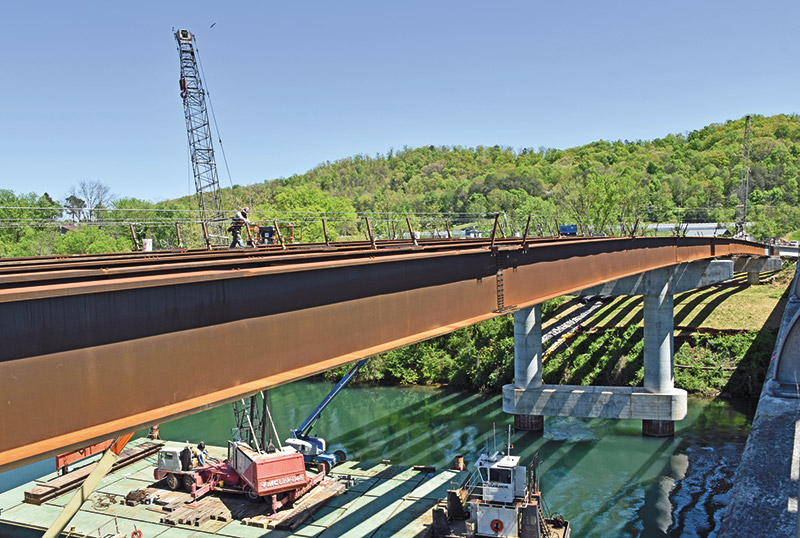 The girders spanning the Clinch River for the replace- ment bridge in Clinton are now nearly in place across the water. Crews are still working on the project as an “essential activity” during the coronavirus shutdown, officials said.
Construction continues on schedule for the new bridge over the Clinch River to replace the Lewallen (Green) Bridge, even with the current stay-at-home order in place.

Problems found while crews were working on the Market Street Bridge rehabilitation project have stopped work there for now as the state awaits updates from Tennessee Department of Transportation engineers on how to proceed.

In addition, rehab work on the underside of the bridge is currently stalled as the state waits to hear from Norfolk Southern Railroad about procedures that affect the grade crossing under the bridge, according to Lynn Murphy, the city’s project coordinator for the bridge projects and the Interstate 75 Exit 122 northbound off-ramp widening.

Meanwhile, work continues on the off-ramp project, but could be delayed because of a shortage of traffic signal poles, which are on back order nationwide, Murphy said.

None of the delays is related to the coronavirus crisis, Murphy said, adding: “All ongoing transportation projects are considered essential functions.”

“Both bridge projects still going, and the big project (the new bridge) is on schedule,” Houck said. “These are considered essential. Market Street has slowed down because of some issues they found they didn’t realize were there.”

On the Lewallen Bridge replacement project, Murphy said Tuesday in an email:

“Eight of nine structures are built, and design/engineering continues for the last one, the northernmost structure, abutment No. 1 (where the steel retaining wall is located).

“Crews continue to use large cranes to set girder beams across the structures. Seventy-two beams are required, and as of today, 39 are installed. Notice that the nine beams between abutment No. 2 and pier 6 (the shortest span on the project) are concrete and not steel.

As for the Market Street Bridge, Murphy said:

“Work began by closing the eastbound slow lane, then removing the existing asphalt surface. This exposed some problems with the bridge decking that were not originally anticipated or budgeted for.

“There is a chance that the sidewalks and parapet walls will need to be completely removed and replaced, and not just patched. This could be an expensive and long-term project, and it is currently being evaluated by TDOT engineers in Nashville.

“Until a decision about this is made, all work on top is shut down (obviously) and crews from the TDOT contractor (Southern Constructors, Inc.) were moved to the underside of the bridge to begin sandblasting and painting the existing steel girder beams.

“Work was proceeding well, then problems arose due to an issue with traffic safety and visibility at the Market Street [railroad crossing], apparently caused by the equipment used to recover the old paint and sandblasting media.

“The painting contractor was required to re-submit a corrective proposal to Norfolk Southern … and sandblasting/painting work may not continue until a new approval from Norfolk Southern is given. I do not have a timeline or estimate for when this might occur. Once approval is given by the [railroad], the contractor is ready to return and proceed with the project.”

“Having said all that, TDOT looked into my request to open the eastbound lane while we wait. It was determined (as I understand it) that the cost to replace the asphalt previously removed, temporarily remove the concrete barricades, and temporarily make the sidewalk safe, was not practical from a cost/benefit standpoint, given the short-term benefit received.

“Understand that these temporary repairs would all need to be torn out once again, as soon as an engineering decision is made on how much additional work is needed beyond the original contract. TDOT will decide if the current contract will be modified/expanded to include any new work, or if a separate project requiring a new bid letting will be created.

On the I-75 ramp project, Murphy said:

“Work to widen the off ramp continues. While progress may appear slow, there is actually no rush to hurry the project, as the completion date is being driven by the availability of new traffic signal mast poles.

“There is a nationwide shortage and backlog for delivery for these type signal poles, and this was known and anticipated when TDOT awarded the contract. Completion date is currently scheduled for Oct. 31.