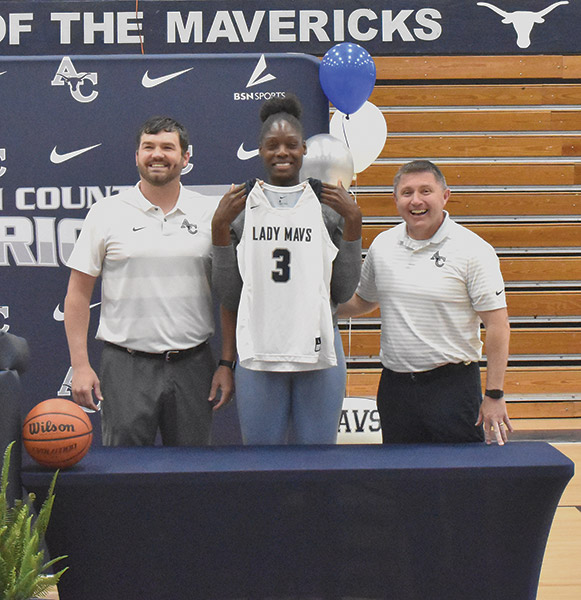 Nicky Anosike
One of two new coaches in the county this season, Nicky Anosike is taking over girls basketball for Anderson County High School.

After a hard season for the Lady Mavs, former head coach Mike Ellis retired, leaving a vacancy and a hard question for the administration: who would replace him?

That’s where Anosike comes in.

A former Tennessee Volunteer under Pat Summit, Anosike was part of the Lady Vols’ back-to-back national championship wins in 2007 and 2008 before graduating and entering the WNBA Draft, where she ws chosen in the second round by the Minnesota Lynx.

In 2011, Anosike was traded to the Washington Mystics, and in 2012, she moved to the Los Angeles Sparks.

Still, even for someone so accomplished, it takes a lot to inspire a team, and Anosike says she understands that.

“I really want to address what happened last season and I want to hear everyone’s opinions on it,” said Anosike. “I want to hear what the players think they could have done better last season and I want everyone to take accountability so that we can heal and move forward and have a great season next season. I’m afraid if I come in and pretend that last season was just a normal season, then I won’t be as effective. I want to address it, let everyone get what they need to off their chests, and then move forward in a positive way.”

Moving forward will be hard for the Mavericks, and for Anosike. Due to the quarantine, Anosike says she hasn’t even gotten to meet with her players yet.

Anosike didn’t plan on being Anderson County’s coach, and she says she credits it to God’s plan.

“I didn’t wake up one morning saying, ‘I’m going to apply for the Anderson County job.’ Someone put my name in and I got a call from the principal explaining that there was a job opening. I decided to apply. I wouldn’t say this was my plan, because it wasn’t, but it was God’s plan, and I went with it – and it was the best plan.”

After the announcement of her hiring on April 17, Anosike made it clear that she intended to push the Lady Mavs to be their best.

“It means getting the most out of every minute we have together,” she said. “I’m not necessarily saying we’re going to practice four hours, because I think that’s excessive, but whether it’s four hours or not, I’m going to make sure we get the most out of that time. I think a good portion of our practice time should be conditioning, but there’s also skills we have to work on that are important. It’s a mixture of maximizing time coupled with the mental aspect of everyone being on the same page and knowing the plays. All that comes with repetition and everyone working together in practice.”

For all the tough talk, though, she hopes that students will come out to play, even if they’re worried basketball might not be the sport for them.

“Anything we do in life, we can find an excuse about why we shouldn’t be doing it, but those heroic underdog stories are all about someone who failed at something and overcame it,” she said. “I would give that same motivation to anyone doubting themselves. No one is perfect and we all have flaws, but we can all be great. It might not be in basketball, but maybe you can learn something in basketball to help you somewhere else. I don’t think any flaws should keep us from doing what we want to do. Even if they are afraid or they don’t think they’re tall enough or coordinated enough, I want to encourage them to still give it a shot. They might surprise themselves with how good they can be.

“I know that I’m going to need a lot of support from a lot of people, including the community. The job I’m taking on is not an easy job ... but I think that if everyone is on the same page and with support from the community, success will come a lot sooner. I really want to encourage the community to come out and support us. I’m not going to say that we’ll win every game, but we’re going to play hard, and it’ll be fun to watch, with a lot of good basketball. I just hope they’ll come and support us and be a part of the ride.”