County gets ‘leads’ on dumpster arsonist 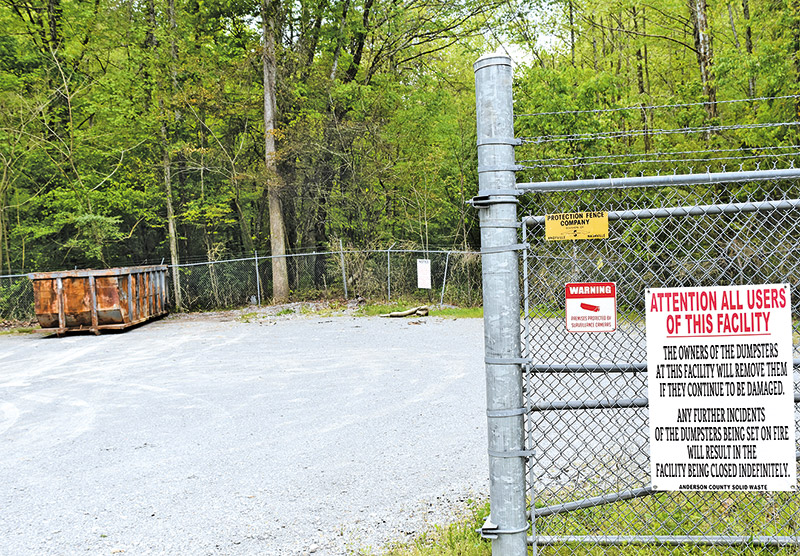 Waste Connections last week returned one of the burned-out dumpsters to the green box site at Cage Creek along New River Road (Tennessee 116) in the New River com- munity in mountainous west Anderson County. County officials have posted a reward for information leading to the arrest of the vandal or vandals responsible for setting fire to the $6,000 dumpsters, and has said that if the arson does not stop, the green box site could be closed permanently. (photo:G. Chambers Williams III )
Anderson County officials say they’re close to identifying the vandal or vandals who have been setting fire to expensive trash dumpsters at the Cage Creek green box site in the remote New River community.

County Mayor Terry Frank started a reward fund – now standing at $1,100 -- in early May seeking information leading to the arrest of those responsible for the fires that have been destroying the $6,000 trash bins provided to the site by contractor Waste Connections.

“I’ve gotten some information from some citizens out there, and we’ve turned that over to the sheriff,” Frank said. “We had someone call to say, ‘Here’s who it is.’ And we have a witness.”

Residents of the community along Tennessee 116 in mountainous far southwest Anderson County could lose the green box site if the fires don’t stop, Frank has said. The vandalism has been going on for the past three years, with the most recent incident on the night of May 5.

Dumpsters at the unattended site are provided to the county under contract by Waste Connections, and that company has told county officials that the vandalism must be stopped, or there will be no more of the bins left at the site.

The dumpsters cost up to $6,000 each, and the fires weaken them and eventually destroy them, said Geoff Trabalka, solid-waste coordinator for Anderson County. The nearest dumpsters beyond the Cage Creek site are at the Browns Flat green box site, 9.1 miles north of the New River site, he said.

Frank said earlier that she doesn’t understand why people would be destroying the dumpsters, since they are put there for the benefit of the New River community. “They are a convenience for the citizens, and I’m still for that,” she said.

Scotty Phillips, who has run the New River General Store near the green box site since 1982, said he doesn’t believe that anyone in the community would be setting the fires.

“I don’t know that it’s people in the community doing it,” he said. “People come in here from outside to dump their trash.”

The site is only a few miles from the Morgan County line, and Trabalka said he has received some information that suggests the vandals could be coming from that county.

“We’re looking for one vehicle in particular,” he said. “One gentleman told the guys it was someone coming in from Morgan County burning their meth labs. … We’ve found meth labs in some weird places when we’ve been out picking up trash.”

The green box site is north of the general store, and sits on the west side of Tennessee 116, near the point where Cage Creek crosses the highway. The site is surrounded by a high chain-link fence, and normally has two dumpsters in place. It is not a staffed site, but the gate is locked in the evenings and unlocked again each morning.

Anderson County has stepped up security in the area to try to deter further incidents and to find the culprits.