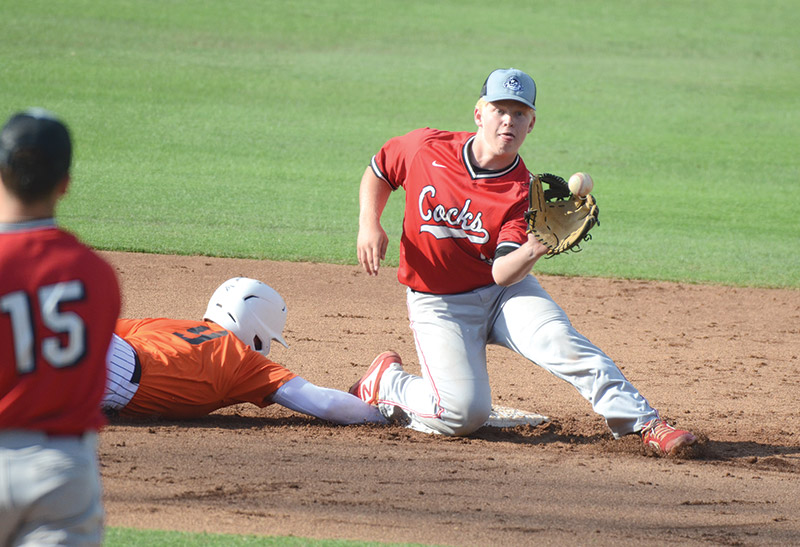 Clinton Riverdog Conner Moody slides back into second safely during play against Newport Monday afternoon at Smokies Stadium in Kodak. (photo:Ken Leinart )
A long day came to a bitter end for the Clinton Riverdogs Monday,

After withstanding a three-and-half-hour rain delay, the Riverdogs came up on the short end of a 6-5 decision against the Newport Cocks in the East Tennessee High School Baseball League at Smokies Stadium.

Making things particularly hard to handle for Clinton was that it darted out to a 4-0 lead before letting the game get away.

“This is hard to take, but the big thing for these kids is that they’re getting games,” Lowe said. “This is for our upper classmen and we’re just happy to have a place to play.

“We were supposed to play at 2 o’clock today and the Smokies postponed our game and we waited until they got the field perfect.”

The game finally started at approximately 5:30 p.m. and the Riverdogs (1-1) jumped to an early 1-0 lead in the bottom of the first after Clinton starter Ethan Tinker struck out the side and Newport (1-1) left the bases loaded in the top of the frame.

In the bottom of the inning, Logan Thomas reached on a one-out single. He advanced to second when Conner Moody walked. Both runners advanced on a wild pitch and Thomas came home on an RBI groundout by Adam Sharp.

In the second, Clinton took a 2-0 lead on an RBI single by Colby Moody that plated Nathan Lee, who drew a leadoff walk in the inning. The Riverdogs extended their advantage to 3-0 when Nick Graham scored on a wild pitch after reaching on an error by the Cocks.

An RBI single by Thomas gave the Riverdogs a 4-0 lead in the bottom of the fourth.

Then, Newport had a big inning in the top of the fifth. The Cocks scored three runs with the help of a pair of defensive miscues by Clinton.

Newport’s Kameron Wheeler reached on an error to lead off the frame, and later scored on a wild pitch. Bradyn Long and Bryce Click then drew consecutive walks with two outs.

They both scored when Dylan Ellison reached on another Clinton error, to make it 4-3.

The Riverdogs made it 5-3 in the bottom of the fifth when Colby Moody drove in a run on an RBI groundout.

The Cocks scored three runs in the top of the sixth and took the lead for good.

David Stinnett and Click had RBI singles, and Wheeler scored on a wild pitch.

Clinton went down in order in the sixth and the Riverdogs suffered their first loss of the summer season despite surrendering only three hits.

“We just have to cut down on the mistakes, the errors, the walks and the wild pitches,” said Lowe, who is an assistant coach at Clinton Middle School. “We swung the bats better today and we’ve played two pretty good games here.