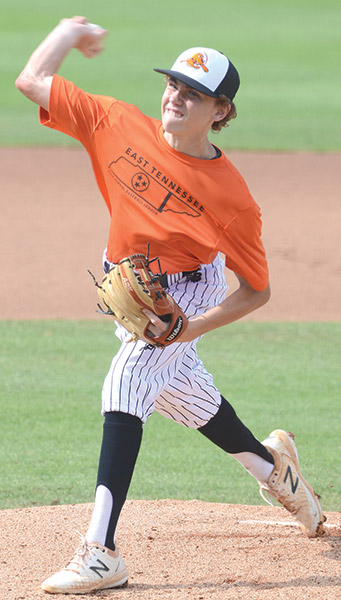 Riverdog Ethan Tinker got the start Monday, June 15, in the Tennessee Baseball League. (photo:Ken Leinart )
Spring sports really got a raw deal this year, with their season essentially robbed out from under them just as they were starting.

For Clinton High School, it was doubly awful, because this was supposed to be Coach Rob Stacy’s first season with the Dragons.

Every cloud has its silver lining, though, and – at least for baseball – that lining is pretty bright.

After all, how many people can say they played a tournament in Smokies Stadium?

In May, the Tennessee Smokies announced the club will host a summer league for East Tennessee High Schools for rising junior and senior baseball players.

The teams are unable to use their schools’ official mascots, so the Clinton team chose the name “Riverdogs” as its moniker for the league.

Head Coach Rob Stacy can’t coach the team due to TSSAA regulations, so Kenneth Lowe, an alumnus of Clinton High School who played under Coach Alvin Taylor, has stepped up along with Lance Hamilton to lead the team.

Lowe has worked with local sports for many years now as an assistant coach at the middle school level.

“I grew up in Clinton, played football and baseball,” he said. “I’ve run the Little League programs in town for years. I’m all about Clinton and our community, so when our head coach asked if I could help out with this, I told him I’d do anything I could.”

The registration cost, according to the Smokies’ website, is $1,000 per team, which sounds enormous until one considers that the fee covers team jerseys, hats, league awards, and other expenses for a 14-game season that runs for two months. Contrast that with a normal weekend tournament that runs from $500 to $1,500, and getting to play in a professional facility – and it doesn’t seem like such a steep price anymore.

“It seems like a lot,” Lowe said. “But when you compare it to a normal tournament, it’s actually pretty good. They put the kids’ pictures up on the big screen every time they go to bat, along with trivia about them. It’s just the same as it would be for a Smokies game. It’s really top notch.”

The stadium will observe social distancing guidelines, according to the Smokies’ official website, but spectators will still be able to purchase concessions and participate in on-field games and experiences. The Riverdogs are trying their best to practice social distancing as well when they – uh – practice.

Lowe said that, at least so far, the experience has been great, and he’s grateful to be able to participate.

“A lot of the high school teams that got their season canceled have joined in, and we’re lucky that we got in,” he said. “Our booster club was able to pay our fees and sponsor us and get us in. The first game was great, we won 4-1 over a team from Morristown across six innings. Chase Lockard was our starting pitcher, and everyone was just really excited to be back on the field.”

The team has eight seniors on it, including a player from Anderson County High School who joined the team.

With the focus on seniors, it’s easy to forget the underclassmen and how they’ve been affected by all this. The freshmen who would usually spend this time acclimating to the difference between middle and high school baseball had that experience completely cut off, meaning they’ll be a year behind and have to play catch-up next year.

Still, the league itself is mostly aimed at seniors and juniors.

“It’s a chance to get them some playing time,” said Lowe. “A couple of these kids had aspirations of going on to play college ball and they never got the chance to really show off or anything like that.”

The Riverdogs had only played one game at the time of Lowe’s comments for this story, but he said the community support they received was “phenomenal.”

“That first night, we had an absolutely great home crowd, and that was all the way at Smokies Stadium,” he said. “We had a full-blown student section from Anderson County and Clinton. Students from both schools came out to support us. We probably had more people at that game than we’ve had at a lot of home games.”

Entry to the games is $5 per person, and there are (usually) three games played per night, with the one fee granting access to all three games. Games start at 2:30 p.m.

“Please come out and support the kids,” Lowe said. “They missed out on a season they worked so hard for. Come take a ‘nine-inning-vacation,’ as they say.”