Harrison Calhoun tapped to lead track and field at ACHS 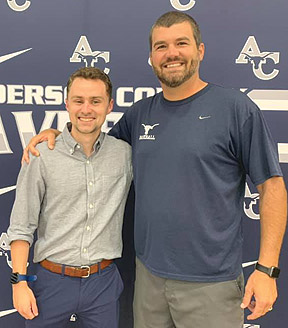 The hiring was announced on Friday, June 26, during summer athletics’ “dead week” period.

Anderson County had a temporary coach this past season (what little season there was) in Ronnie Miller, who took over the position from beloved long-time coach Al Rodd until the school could find a full-time coach.

Calhoun said he’s got big plans for the program, but he’s keeping his expectations modest for the first year.

“You look at the running clubs and track clubs in Knoxville, and I really want to bring that to Anderson County. It’s not going to be easy. There’s going to be a lot of challenges.”

“Right now, I’ll just be coaching and subbing part-time until I can get a full-time position with the school, but I’m hoping to teach either world history or American history,” he said.

In college, he was the “distance guy” at Lincoln Memorial University.

“I ran cross country.,” Calhoun said. “I was one of the guys with the most distance on the team. When you do track, though, you work out in the same place and even do a lot of the same workouts, so I do have knowledge in both sprinting and distance. Obviously, though I still have a lot of work to do during this offseason. It’s going to be a big learning process.”

Luckily, Calhoun should have a good teacher as he helps out with cross country in the fall under long-time Anderson County Coach Derek Wallace. Calhoun helped with the cross country team last fall, and he’s excited to see a lot of the returning runners.

“We had strong numbers last year and we have a lot of returners this year, so it should transfer over to track as well hopefully,” Calhoun said. “I’m hoping to do a lot of recruiting from other sports, too, if the coaches will let me.”

Calhoun said he thinks it should be an easy sell for a lot of athletes competing in other sports, with the timing of the season and the individual nature of the sport appealing to a lot of athletes.

“I want to stay in communication with the coaches and see what players’ strengths are,” he said. “I think a lot of [the appeal] will be with track being a perfect time to show off your talent and your skills. Whether you’re racing a teammate or a rival, ultimately you’re racing for yourself. It’s your sport, and it’s your chance to go out and show everyone what you’ve got.

“I think that will really motivate a lot of athletes to come out and work hard.”

Between his time as a high school runner and a college athlete, Calhoun said he hopes he can bring a lot of experience to help younger athletes who want to compete at the next level.

“That’s what I’m trying to do, I’m trying to build a program based off of what I learned in college and try to show kids the right path to go for if they want to go forward with running,” he said. “I want to show them the things I didn’t do and wish I should have and the things I did do that succeeded and helped me.”

With everything together, though, and the support of not only seasoned coaches but also a co-partner head coach in Longmire, Calhoun believes he has all the makings for a successful coach after he settles in. He’s grateful for the opportunity, too, he said.

“I do want to thank Ben Downs, Gary Terry, and the Anderson County staff and school board for giving me this job. It means a lot to me and I really want to meet their expectations.

“ It was a great opportunity, and I just really, really want to thank all of them.”