Work on bridge over Market Street still on hold 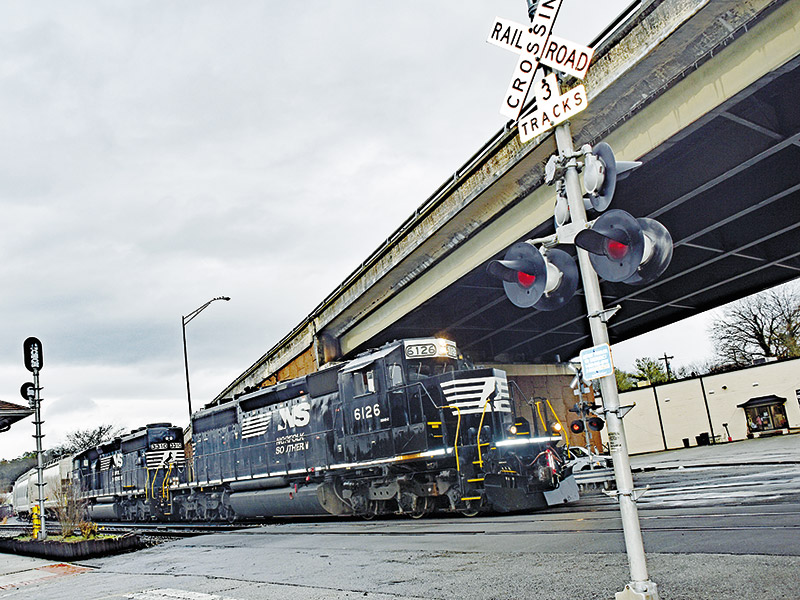 A Norfolk Southern train crosses Market Street in downtown Clinton under the Tennessee 61 bridge, which is undergoing rehabilitation. The bridge work is currently on hold. (photo:G. Chambers Williams III )
Work to rehabilitate the Charles G. Seivers Boulevard/Tennessee 61 bridge over Market Street and the Norfolk Southern Railway in downtown Clinton is still on hold – as it has been for several months – and no completion date has been suggested yet for the project, the city of Clinton says.

The bridge work, which began in November and has blocked one eastbound lane of the bridge since then, was originally scheduled to have been completed nearly two months ago.

More-extensive deterioration of some bridge structures were found as the original work progressed, necessitating expansion of the then-$1.5 million project by an additional approximately $1.2 million, which would have to be awarded in a new contract.

That second part of the project is still awaiting approval and funding by the Tennessee Department of Transportation, and the job cannot proceed until that is settled, said Lynn Murphy, project coordinator for the city.

Additionally, work to remove the old paint from the girders under the bridge deck and repaint them has stalled, pending resolution of a safety issue regarding the Market Street railroad crossing under the bridge, Murphy said.

New crossing safety procedures are still awaiting approval by the railroad, he said.

As for the widening of the Interstate 75/Exit 122 northbound exit ramp, Murphy said that project is on or ahead of schedule and should be finished on time, no later than Oct. 31.

Work crews have already been laying concrete pavement for the new right-turn lanes as part of the $762,850 project.

“This project was originally scheduled for completion before May 15, 2020. I have recently spoken with TDOT about the status of the work, which has been suspended for the past several months. Here is a summary:

“1) The bridge work began with the closing of one east bound traffic lane. Crews started by removing the existing asphalt and concrete surfaces. The excavation exposed problems which were not originally anticipated. It was discovered that much of the reinforcement steel connecting the bridge deck to the bridge overhang, consisting of the sidewalk and parapet wall, had been cut at some point (possibly during a previous rehab project) years ago.

“Additional engineering was called for and new plans have been drawn, outlining the necessary repairs for the overhang. The repair will require the complete replacement of the existing sidewalks and parapet walls. Construction plans for this work were recently sent to the TDOT office in Nashville for review and approval. Once the plans are approved and funding is appropriated, the contractor will be notified to proceed.

“The original contract was bid at just under [$1.5 million.] The additional work is estimated to add approximately [$1.2 million] to the costs.

“I also spoke with a representative from Southern Constructors, Inc., the TDOT contractor for the Market Street bridge project. He concurs with the TDOT assessment I was given. He estimates it will take about one month for TDOT Nashville to reply.

“Once the contractor is given notice to proceed, he estimates it will take approximately two months to mobilize equipment and material before any work begins. During this same two-month period, the contractor will submit [its] work method plans for the sidewalk and wall removal to Norfolk Southern, and will be awaiting [railroad] approval.

“A schedule for the completion of the entire project will not be available until after the contractor is awarded the additional work. The contractor expects to start work on top at the bridge deck, before a painting contractor returns (see below).

“2) Once crews discovered the bridge deck issues and were waiting for TDOT engineering, they moved from the traffic lanes and began work beneath the bridge.

“New paint for the steel girder beams beneath the bridge deck requires that the surface be properly prepared by sand blasting, to remove the old paint. The paint chips and sand blasting media must be contained, recovered, and then properly disposed of.

“Sandblasting work was underway, but was suspended when some of the paint-recovery equipment blocked the required visibility distance for the vehicles crossing the [railroad] tracks. New methods that will comply are currently being explored.

“Since the bridge repair work is over Norfolk Southern railroad, certain methods are required to ensure safety for both vehicular and train traffic at the Market Street railroad crossing.

“This requires the painting sub-contractor to submit work-method plans to Norfolk Southern for review and approval before any work may proceed. These reviews take time and add to the project calendar.”