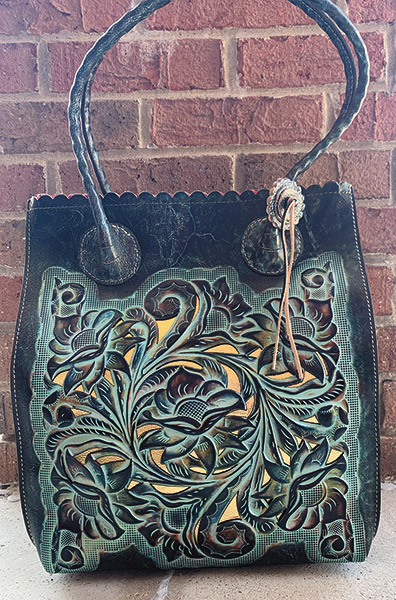 This is one of the designer purses up for auction by the Anderson County Chamber in connection with the Purses and Pearl Luncheon to be held Aug. 18. The 18 auction items will go live on the online auction site jdsauctions.com on Aug. 1.
It’s already too late to get tickets -- COVID-19 took care of that – but the first Purses and Pearls luncheon of the Anderson County Chamber of Commerce is set for Aug. 18.

Besides money contributed by business sponsors and ticket sales at $50 each, there also will be silent auctions of several donated designer purses and pearl jewelry items, such as bracelets and necklaces, said Tammy Gross, the event chairwoman who also is human resources manager for Paschal Solutions, a local engineering consulting firm.

The auction of the purses and pearls begins online Aug. 1 at the website of JD’s Auctions of Clinton (jdsauctions.com), and will conclude during the luncheon. It will run from 11:30 a.m.-1 p.m. Tuesday, Aug. 18, at the Junior Achievement building at 2135 N. Charles G. Seivers Blvd., Gross said.

“This event will be a trial run for us, and we hope to continue this annually,” Hawkins said. “We intended to have it in April, but it got canceled by the coronavirus pandemic.”

Keynote speaker for the event will be Dr. Shirley Raines, the former president of the University of Memphis, who will speak on the topic “What Women Can Do,” Hawkins said.

Raines began her career as a pre-school teacher, but continued her education and climbed the ladder to become the first female president of the University of Memphis.

The original idea for the Anderson County Chamber’s Purses and Pearls event came from Gross, who moved to Clinton from Kentucky.

“I lived in Paducah, and then moved here four years ago,” Gross said. “We had a similar event in Paducah called the ‘Power of the Purse’ every April, marking women’s suffrage and payroll equity.

“I brought that information to the Anderson County Chamber,” she said.

“We’re incorporating the pearls part from the history of Clinton, which years ago had a trade for pearls from the Clinch River.

“We were hoping to do a silent auction in April,” she said.

“We were planning to sell 250 tickets to the event.”

Instead, because of COVID-19 restrictions, the banquet room at Junior Achievement can accommodate only 50 people for the luncheon, and all tickets have already been sold, Hawkins said.

Gross said the 50-person limit is disappointing, but the chamber hopes to hold the event again next year, hopefully without the coronavirus restrictions.

“JD’s Auctions will be doing an online auction of all of the items,” Gross said. “Around 15 items will be posted through his live auction site on Aug. 1 and run through the day of the event. People attending will have opportunity to live bid from the event, and the auctions will wrap up at the luncheon.”

The purses and pearl items will be on display at the event, “but they will not be able to be touched,” Gross said. There also will be “favor” boxes with donated items and door prizes that will be available during the event, she said.

The cafeteria-style lunch will be catered by Hanna’s of Oak Ridge.

Several sponsors are women-owned businesses, but not all, Gross said. Information about the event and the list of sponsors can be found online at pursespearlsac.com.

“We have a wonderful committee of volunteers from chamber members,” Gross said. “It has been wonderful to work with them.”