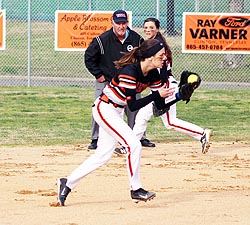 The Lady Dragons’ Karleigh York scoops up a ground ball as Halie Martin backs up the play.
The Clinton Lady Dragons had a tough week.

On Tuesday, the Lady fell to visiting Powell - one of the top teams in the a very talented District 3-AAA - by a score of 25-3.

It was all Lady Panthers from the start as Powell scored nine runs in the first.

Clinton answered with a pair of runs in the bottom of the inning when Lexie Cochran led off with a double and Lexie Jacobik singled. They both scored on a base hit by Sophie Seivers.

Powell scored two in the top of the second to go up 11-2.

Clinton picked up a run in the bottom of the second when Skylar Newby hit a solo home run.

The Lady Panthers scored four in the top of the third to push their lead to 15-3.

Powell plated 10 runs in the top of the fourth to end the game in four innings.

Seven errors were committed by Clinton in the field.

On Friday, the Lady Dragons traveled to Oliver Springs for a double header.

In the first game, the Lady Bobcats won 5-4.

Clinton scored three runs in the first to to take the lead and added a run in the second to lead 4-0.

Kara Bradley got the start and turned in a solid performance as she took the loss. She went four and a third innings, allowed two hits and four earned runs with two strikeouts and two walks.

At the plate, Jacobik went 2-3 with a double and two RBI while Seivers was 1-3 with a triple and two RBI. Cochran, Newby, Nikki Jones, and Karleigh York also had hits for the Lady Dragons.

Oliver Springs scored three runs in the first and the Lady Dragons answered with a run.

Newby took the loss as she went the distance and allowed four earned runs on seven hits. At the plate, she went 2-3 with a double and two runs scored.

Jacobik was 1-2 with an RBI while York, Jones, Halie Martin, and Kinsley Williams also collected base hits. Williams also had an RBI.

The Lady Dragons dropped a heartbreaker to visiting Karns on Monday by a score of 6-5.

The Lady Beavers scored two in the first and one in the second. They added three in the third to lead 6-0.

Bradley turned in an impressive performance inside the circle. She went the distance and allowed no earned runs on six hits with four strikeouts.

Jones led the Lady Dragons at the plate as she went 2-3 with a double and three RBI.

The Lady Dragons return to action on Thursday when they will play in the Oak Ridge Invitational, which will run through Saturday. Opponents and times are to be announced. They visit Gibbs on Monday at 5:30 p.m. and travel to Knox Central on Tuesday at 6 p.m.