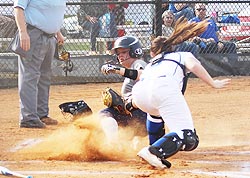 Anderson County’s Maddie Sickau slides home for a score in the win over Karns.
It was a busy but productive spring break for the Anderson County Lady Mavericks as they traveled to Cookeville and won first place in the Third Annual Jackson County Softball Tournament (Gold Division).

Anderson County went to Karns on Tuesday and was leading 11-4 after four innings when the skies opened up and washed away the stats of the game, which included a pair of home runs by Emilee Fowler as well as multiple hits by Maddie Sickau, Jada Reeves, Emelia Yelencich, Gracie Webb, and Mallorie Overton.

The game was started over on Wednesday afternoon and the Lady Mavs won 10-0 in five innings.

Anderson County picked up a run in the first when Sickau singled and advanced to third on a hit by Reeves. Sickau later scored on a wild pitch.

It was a 1-0 game until the the top of the third when the Lady Mavs plated four runs.

Sickau led off with a walk and moved to second on a sacrifice bunt by Reeves. Fowler then waked as Yelencich. Webb singled to score Sickau and Fowler. The left fielder booted the ball allowing Yelencich to move to third and Webb to second. Courtney Lively then singled home both runs.

In the fourth inning, Anderson County added two runs when Sickau led off with a single and Reeves reached on an error. Fowler singled to load the bases and Yelencich walked to score Sickau. Webb then singled in Reeves.

The Lady Mavs closed out the game in the top of fifth with three runs as Overton led off with a triple and MaKenzie Jones drove her in with a base hit. Sickau was then hit by a pitch. Jones then scored on an error as Reeves reached base and Sikau went to third. Fowler walked and Webb singled to score Sickau.

Hannah Bruce got the start and went the distance as she allowed only three hits to go with five strikeouts and two walks.

“I was worried if we were mentally ready before the game. We had 14 hits last night [in the game erased by weather]. I didn’t want them thinking we were just going to show up and roll over them. We had to execute offensively and defensively and make them make plays Luckily, they didn’t make a few and we capitalized,” said Allen Russell, head coach of the Lady Mavs.

On Friday, Anderson County beat Neuqua Valley (Naperville, Ill.) by a score of 5-2 in the opening game of the Jackson County Tournament.

The Lady Mavs took a 1-0 lead in the first but Neuqua Valley responded with two in the top of the second.

Anderson County scored three runs in the third and added a run in the fourth.

Bruce got the win as she went all five innings. She allowed two earned runs on eight hits with four strikeouts.

At the plate, Sickau was 2-3 with a double and three runs scored. Fowler was 1-2 with two RBI.

Sickau led off the game with a home run. She went 2-2 and three RBI. Fowler was 1-2 with three RBI while Lively was 3-3 with a double, two RBI, and three runs scored.

Overton was 2-2 with a double, two RBI, and two runs scored and Molly Muncy was 3-3 with two doubles and three runs scored.

Bruce pitched two innings for the win and allowed only two hits.

On Saturday, Anderson County suffered their only loss in the tournament as they fell to Heritage by a score of 6-3.

The Lady Mountaineers scored twice in the first but the Lady Mavs tied the game with two runs in the second.

Heritage scored four in the top of the fourth while Anderson County scored a run in the bottom of the inning to wrap up scoring.

At the plate, Reeves went 2-3 with a double and a run scored. Lively was 1-2 with two RBI.

In their second game Saturday, the Lady Mavs beat Livingston Academy 7-6 in a thriller.

But the Lady Mavs were up to the task - and sat a tone for the day - as they rallied for five runs and the win.

The win came courtesy of a a walk-off two-run double by Lively.

Giles got the win in relief. She pitched one inning with two strikeouts.

After a short break and an opportunity to catch a quick breath, the Lady Mavs beat Neuqua Valley 9-8 in the semi-finals on another last inning rally and walk-off hit.

The Lady Wildcats scored a run in the top of the second, two in the third, and five in the fifth to lead 8-0.

Anderson County saved their best for last as they plated nine runs. They won on a walk-off RBI double by Reeves.

Giles picked up the win in relief.

In the championship game, the Lady Mavs won on their third consecutive last inning rally with a walk-off hit to beat John Marshall (Glen Dale, West Va.) by a score of 7-6.

The Lady Lions took a 1-0 lead in the first and added a run in the second before Anderson County scored three runs in the bottom of the inning to take a 3-2 lead.

The Lady Lions scored four in the top of the fourth to reclaim the lead at 6-3.

In the bottom of the inning, the Lady Mavs battled back and won a walk-off RBI double by Webb, who went 2-3 with two doubles and an RBI.

Yelencich was 1-1 with a home run, RBI, and two walks.

Sickau was 1-3 with a double and two RBI while Overton was 2-2 with two RBI.

Bruce got the start and went three innings. She allowed one hit and struck out five.

The Lady Mavs return to action on Thursday when they host Knox Central at 5:30 p.m. and Hardin Valley on Friday at 6 p.m.

They visit Powell on Saturday at 2 p.m. and host Campbell County on Monday at 5:30 p.m.