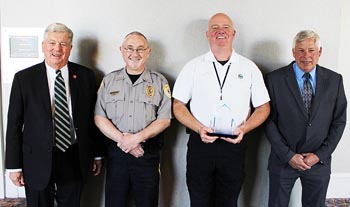 The Tennessee Corrections Institute is the state agency which regulates local jails and workhouses.

The award was presented at the annual TCI Jail Issues Conference in Franklin.

The Jail Administrator of the Year award is awarded to a worthy candidate who must be a full-time jail administrator responsible for operations within a local correctional facility.

The nominee must have demonstrated a high level of professionalism and dedication in the area of corrections within the agency and community. They must have initiated or promoted programs enhancing the operations of a correctional facility within the State of Tennessee.

They must also have contributed toward the overall mission of TCI in working to develop a professional corrections environment for today and tomorrow.

Johnson began his career with the Anderson County Sheriff Department in February, 1981.

After working patrol duties, Johnson was assigned to the jail and was promoted to sergeant in charge of jail operations in March, 1984. As the responsibilities of the jail increased, Chief Johnson was promoted through the ranks of lieutenant, captain, and Chief Jailer. Except for brief periods, Johnson has remained as the jail administrator since 1984 and may be the longest serving jail administrator in Tennessee. During his tenure, the Anderson County jail has grown from a small facility in the courthouse to a modern detention center that will hold more than 500 inmates.

Johnson’s knowledge and experience have been invaluable to the department over these many years. Each renovation and expansion of the jail required expertise.

Johnson was instrumental in implementing the first ever “Alternatives to Incarceration” program for Anderson County. This new innovative effort brought new programs into the jail to improve inmate reintegration into society. Under his supervision, programs such as Adult Education, Moral Reconciliation Therapy, Anger Management, Parenting classes, and many others have reduced the inmate population in the jail and returned better persons back into society.