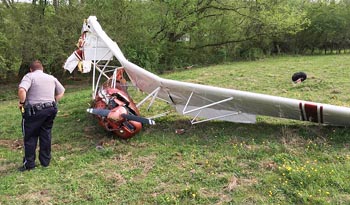 According to the Anderson County Sheriff’s Office, Stringer, 40, Oliver Springs, was attempting to land his aircraft on a private grass landing strip in a field near Valley Drive when he crashed.

The field is near Stringer’s Ray Lane home. The accident happened at about 3:30 p.m. Saturday, April 15.

The Federal Aviation Administration and the National Transportation Safety Board were notified and will follow-up on the crash this week.