Dragons struggling at the plate 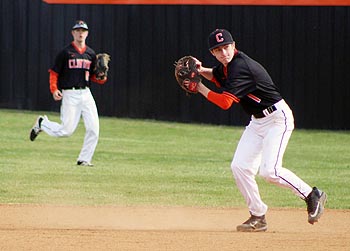 Clinton’s Spencer Byrd prepares to make a throw from second against Powell last week.
The Clinton Dragons lost at Powell on Tuesday by a score of 10-0.

The Panthers scored five in the first and five in the fifth for the win as the Dragons were held to just one hit — a single by Jackson Duncan — off of Powell starter Stalcup, who struck out seven.

Duncan also got the start and was charged with the loss as he allowed five runs on three hits.

In two games with Powell this season the Dragons have a combined three hits.

Clinton beat visiting Cocke County on Thursday by a score of 5-4.

The Dragons won on a walk-off RBI single by Isaiah Murphy.

Austin Kelly got the win in relief. He pitched one inning and allowed no earned runs on three hits.

Clinton only had two hits in the game — the game winner by Murphy and a base hit by Alex Burton, who also scored a run.

Zach Webber had a RBI and twice reached on a walk.

“We’re not hitting so we just had to get creative and find ways to manufacture some runs. We’re just not hitting but we’ll keep working and we’ll break out of this slump,” Byrd said.

On Friday, the Dragons fell at Karns by a score of 10-0 in five innings.

The Beavers scored two in the first and two in the second. They added six in the bottom of the fifth as the Dragons were held to just one hit — a single by Blake Sherwood.

Luke Johnson suffered the loss as he went four innings and gave up nine runs on eight hits with two strikeouts.

“Luke Johnson pitched great it just got away from us late,” Byrd said.

The Dragons return to action on Wednesday when they visit Anderson County at 7 p.m. in a game rescheduled from Monday.