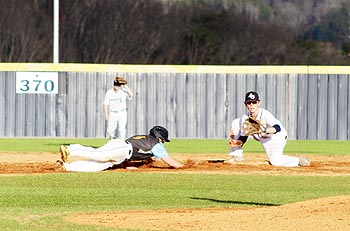 Anderson County shortstop Denver Hubbard takes a pick-off throw at second base against Gibbs last Tuesday.
The Anderson County Mavericks fell to Gibbs by a score of 10-2 on Tuesday in the continuation of a game that started on Monday at night at Gibbs.

Monday night’s game was suspended due to rain. It was continued Tuesday at Murriel Albright Field as the Mavericks and Eagles were scheduled to play the back end of a home and home series.

The Eagles scored three in the first and four in the second to lead 7-0. Anderson County scored a run in the fifth but Gibbs answered with a run. The Mavericks scored one in the sixth but Gibbs plated two in the bottom of the inning to make the final 10-2.

Chase Elkins took the loss as he went four innings and allowed seven runs on nine hits with three strikeouts. At the plate he was 1-4 with an RBI.

Grayson Terry was 1-3 with a double and an RBI.

Rhett Bowling and Cole Foust also each had a hit.

In the nightcap, Anderson County fell to Gibbs by a score of 6-1.

The game was scoreless until the top of the fourth when the Eagles scored two runs. They added a run in the sixth.

The Mavericks scored their lone run in the bottom of the sixth.

Gibbs scored three in the top of the seventh.

The Mavericks were held to just one hit — a single by Elkins.

Moog got the start and the loss as he went six innings. He allowed five runs on seven hits with 10 strikeouts.

“A couple of mistakes really put us behind the eight-ball. They executed a couple of really nice bunts on us and picked up some runs. And the kid they threw [Gibbs starter Hill] is pretty dang good. He’s one of the best in our area,” said Ben Downs, head coach of the Mavericks.

On Wednesday, Anderson County traveled to Knox Central to resume a game that was suspended on March 21 with the score tied at 3-3 in the bottom of the third.

Moog took the loss as he went two and a third innings and allowed two earned runs on six hits with three strikeouts.

The Mavericks committed seven errors in the field.

Hubbard, Moog, and Andy Fox also each had a hit.

“We didn’t hit it real well. We started with three [runs] and ended with three. We just got outplayed,” Downs said.

On Friday, the Mavericks fell in heartbreaking fashion at Halls by a score of 3-2.

The Red Devils jumped out to a 1-0 lead in the second but the Mavericks rallied for two runs in the top of the fourth.

The lead held until the bottom of the seventh when Halls won in walk-off fashion.

Elkins went the distance and deserved a better fate He allowed two earned runs on seven hits with seven strikeouts. The Mavericks committed three errors behind him.

Anderson County’s Zeke Meyers was 2-4 while Trey Noe was 2-3 with a run scored. Caleb Wilhiot was 1-3.

“It was the toughest game of the week. Chase Elkins threw really well. He had them off-balance most of the game. He got up to his pitch limit and I had to pull him. Then we didn’t execute a couple of bunt coverages. The last one [bunt coverage] we threw it away at first base and a kid scored from second. It’s a tough way to lose,” Downs said.

The Mavericks traveled to Sweetwater on Saturday and took a 4-1 win.

Anderson County picked up a run in the first and added a run in the fourth. Sweetwater scored in the bottom of the fourth to make it a 2-1 game but the Mavericks got the run back in the top of the fifth. They added an insurance run in the seventh.

Preston Seiber picked up the win as he went four and two-thirds innings. He allowed one run on five hits with four strikeouts.

Jackson Muncy came on for the save as he went two and one-third innings. He allowed one hit and struck out three.

Thomas Sexton was 1-1 with a double.

“It was the quickest game of the season. It only lasted an hour and 20 minutes. It was a very clean game. Seiber and Muncy pitched really well for us,” Downs said.

The Mavericks return to action on Wednesday when they host the Clinton Dragons. The game was rescheduled from Monday due to rain. On Thursday they host South Doyle at 5:30 p.m. On Friday the Mavericks visit Walker Valley for a 7 p.m. game and host Loudon at noon on Saturday.