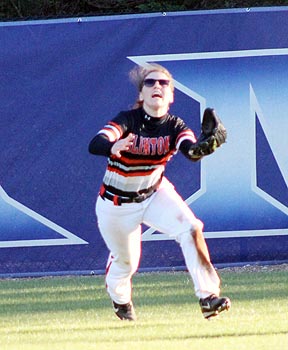 Clinton’s Nikki Jones moves in to make a diving catch in centerfield against Grace Christian on Friday evening.
The Clinton Lady Dragons dropped a close one at Knox Central on Tuesday, falling 2-0.

Kara Bradley had another strong performance inside the circle but came out on the losing end as she pitched all six innings She allowed two runs on five hits with three strikeouts.

The Lady Dragons collected four hits — one each by Lexie Cochran, Skylar Newby, Halie Martin, and Bradley. Each had a stolen base while Martin had two steals but they could not push a run across.

“We had four hits and they had five. Kara did a great job pitching but their pitcher kept us off-balance with her rise ball and we just couldn’t figure it out,” said Lecia Watson, head coach of the Lady Dragons.

The Lady Dragons dropped a non-district game at Grace Christian on Friday afternoon by a score of 9-2.

The Lady Rams scored an unearned run in the first to lead 1-0. They added four runs in the second to push their lead to 5-0.

Clinton added a run in the top of the third when Sara Hammitt got a one-out single and stole second. She later scored on a base hit by Newby.

The Lady Dragons’ Nikki Jones made a stellar diving catch of a sinking line drive to end the third, preventing a run from scoring but Grace managed to add two runs in the bottom of the fourth to lead 7-1.

Clinton’s Sophie Seivers crushed a solo homer to right center in the top of the sixth to cut the Lady Rams’ advantage to 7-2.

Grace added two runs in the bottom of the sixth and might have added more except for another great defensive play by Jones who made a great running catch of a line drive into right center.

Bradley and Cochran added hits in the seventh but the Lady Dragons could not get them across.

“We played a solid team — I know, because that’s where I came from. But our bats are not going right now. If we do not get our bats going in the next two weeks, we’re going to be in trouble,” said Watson.

“Seivers got one over the fence and she needed it — that’s a big confidence booster for her. That’s one of the best ways to get out of a slump,” she said.

“Nikki [Jones] was a bright spot in defense tonight. I loved her effort. She will go all out for you. That’s why she’s a good centerfielder,” Watson said.

Bradley took the loss. She went the distance and allowed eight earned runs on 13 hits.

Hammitt was 1-2 with a run scored while Martin drew three walks.