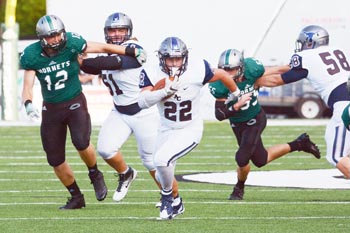 Anderson County’s Mason Phillips tears through the Carter defense as Thomas Roberts (51) and Brandon Elliott (58) provide the blocking.
The Anderson County Mavericks squashed the Carter Hornets like a bug Thursday night as they overcame heat, humidity, and a hostile road environment to claim a 52-27 win their season opener.

The Mavericks’ defense set the tone early as Ryan Moog tackled Carter quarterback Kobe Wilson in the end zone for a safety on the third play of the game.

The Mavericks’ offense could not get anything going and had to punt the ball away and again the defense returned to the field. They forced a quick three and out to give Anderson County the ball at the Carter 47-yard line.

Six plays later, quarterback Stanton Martin found Dalton Wilson for a 26-yard touchdown pass. The extra point by Clayton Utley was good and the Mavericks led 9-0 with 7:26 left in the first quarter.

If anyone thought Carter would fold at the point, they were wrong. The Hornets bounced back with a five-play, 78-yard drive that was capped by a 15-yard touchdown pass from Wilson to Dillon Hensley. Parker McNew added the extra point and the Mavericks led 9-7 with 5:36 left in the opening quarter.

Anderson County answered with a 10-play drive, which took them all the way down to the Carter 15-yard line before a fumble ended the drive.

The Mavericks’ defense held again and forced the Hornets to punt the ball away.

Three plays later, Martin ran 24 yards for a score but the two-point conversion attempt failed. With 11:49 remaining in the first half, Anderson County led 15-7.

On the ensuing possession it looked as though the Mavericks’ defense had again stopped the Hornets. Carter lined up on fourth and one from its own 35-yard line. On what appeared to be a busted play, Wilson popped free around the right side and rambled 65 yards for the score.

The two-point conversion attempt failed and Anderson County held a 15-13 lead with 8:51 left in the first half.

The Mavericks offense then marched 64 yards in seven plays but the drive stalled at the Carter 12-yard line. Utley came on and booted a 27-yard field goal to boost the Anderson County lead to 18-13 with 5:54 left in the half.

The euphoria of the scoring drive was short-lived as the Hornets’ Isaac Scarbrough returned the ensuing kick-off 95 yards for a touchdown. The PAT by McNew was good and Carter took a 20-18 lead with 5:35 remaining in the half.

The next Anderson County drive ended with an interception, to give Carter the ball at the Mavericks’ 33-yard line.

Three plays later, the Hornets’ Nicholas Davids scored on a 15-yard run. McNew added the PAT and Carter led a stunned Anderson County squad 27-18 with 2:32 left in the half.

Martin led the Mavericks from their own 21-yard line down to the Carter 28. On fourth and one, Martin dropped back to pass. With the ball in the air, a Carter defender level Dalton Wilson with a cheap shot. The defender was ejected and the Mavericks picked up an automatic first down at the Hornets’ 12-yard line.

On the next play, Martin threw a touchdown strike to Michael Carroll in the back of the end zone. Utley kicked the extra point and the Mavericks trailed 27-25 at the half.

And then the second half happened.

The Anderson County offensive line took over the game as they dominated in the trenches. They opened holes for the hard running of Mason Phillips, which set up a screen pass to Marquise Gallahar that covered 25 yards. Phillips capped a seven-play, 51-yard drive with a two-yard touchdown plunge. Utley added the PAT and the Mavericks reclaimed the lead at 32-27 with 8:57 remaining in the third quarter.

The Anderson County defense forced another quick three and out. The Mavericks’ offense returned to the field and Martin electrified the crowd with a 33-yard scramble to give Anderson County a first down at the Carter 20-yard line.

The combination of Gallahar and Phillips pushed the ball down to the six-yard line. On fourth and three, the Mavericks went for it and Martin’s pass was incomplete although it appeared to be pass interference, no flag fell and Anderson County turned the ball over on downs.

On the second play of the Carter drive, the Mavericks flushed Wilson from the pocket. As he scrambled through his own end zone he attempted to throw the ball away. The pass fell short of the line of scrimmage, resulting in an intentional grounding call and the second safety of the game.

On the next drive, the Mavericks went 72 yards in four plays with the highlight of the drive being a 61-yard run by Martin for the score. Utley’s kick pushed the Anderson County lead to 41-27 with 2:51 remaining in the third quarter.

The next Carter possession ended when Carroll intercepted a pass to give his team the ball at his own six-yard line.

Phillips ran for 20 yards and then Martin exploded for 63 yards. Gallahar ended the six-play, 94-yard drive with a three-yard touchdown run. Utley added the PAT and the Mavericks led 48-27 with 8:57 remaining in the game.

Anderson County had one scoring drive left in them as they went 64 yards in eight plays. Martin threw a one-yard pass to Chris Powell for the score. Utley added the PAT kick to end scoring at 55-27.

“This was my worst fear coming out: Wasted plays, turning the ball over, and penalties. I feel like we were the superior team. We’ve got some good football players and some good coaches. They’ve all been working hard,” said Davey Gillum, head coach of the Mavericks.

“You never know the first game. You’ve got a lot of nerves and it takes time to get hitting on all cylinders. Our kick-off team wasn’t good and we dominated the game and came out at halftime down. We had lost momentum and they had it. Our kids cleaned it up and did a great job taking control,” he said.

“Our offensive line just took over the second half — they dominated the line of scrimmage and Stanton [Martin] was the best player on the field. They couldn’t stop him,” Gillum said.

Martin led the Mavericks with 193 net yards rushing on 11 carries with two touchdowns. He was also 16-26 passing for 247 yards and three touchdowns.

Phillips carried the ball 21 times for 120 yards and a touchdown.

Wilson had four receptions for 97 yards and touchdown while Moog had four catches for 43 yards.

Andrew Hatmaker led Anderson County with six total tackles. Chris Powell and Jacob McCall each had four total tackles and each recorded a tackle for loss.

Carroll had the lone interception for the Mavericks.

The Mavericks open their home schedule on Friday when they host William Blount at 7:30 p.m.