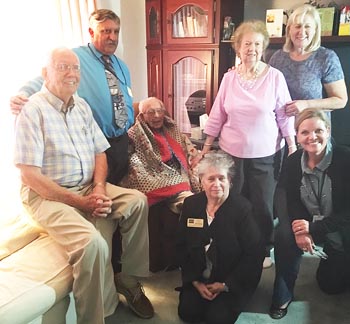 World War II veteran Frank Clouse and his friend and fellow WWII veteran, Carson Baldwin. Baldwin nominated Clouse for a Quilt of Valor and requested a picture of just the two of them together in order to remember and share this special day. Carson Baldwin, from left, Leon Jaquet, Quilt of Valor recipient Frank Clouse, Margaret Clouse, Kathy Chippendale, Gwen Cole, and County Mayor Terry Frank.
On Wednesday afternoon, Oct. 4, Gwen Cole and Kathy Chippendale of Clinch River Quilts of Valor made a special trip to the home of Frank Clouse to award him with a “Quilt of Valor.”

Clouse went on to work at K-25 and Y-12 following his service.

On hand for the presentation were Anderson County Mayor Terry Frank, Anderson County Director of Veterans Services Leon Jaquet, and long-time friend of Clouse, Mr. Carson Baldwin. Carson Baldwin, himself a World War II Army veteran who had previously been awarded a Quilt of Valor, nominated Clouse for the quilt.

“Frank and I have gone to church together for about 40 years, and we are the last two World War II veterans left in our church,” said Baldwin.

“It is our privilege to serve, honor and comfort you through the award of this Quilt of Valor, though we may never know the depth of your sacrifice,” said Cole during the presentation.

Surrounded by his wife, Margaret, and his son, Frank, an appreciative Clouse told everyone he planned to “use the quilt, not just look at it”—and that he wished he had had the quilt when he was serving in Europe during “one of their coldest winters on record.”