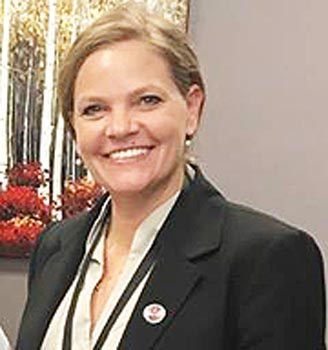 Anderson County Mayor Terry Frank has officially announced her bid for re-election for the Republican primary of May 1, 2018.

“I can say without a doubt that I believe my job is serving people and I am enormously thankful for the opportunity I have had to work for the people of Anderson County. During the coming weeks of the campaign, I look forward to sharing the positive progress we’ve made and the accomplishments we’ve celebrated,” said Mayor Terry Frank.

Frank has been focused on education, youth development, jobs and economic opportuni-ty, but has also devoted much time and energy to veterans, senior adults, animal welfare issues as well as the issues surrounding opiate addiction.

She attended both the University of the South at Sewanee and Middle Tennessee State University where she earned a Bachelor of Arts degree in Political Science. Prior to her election in 2012, she and her husband Lee owned and operated Nature’s Marketplace in Oak Ridge for nearly 20 years.

Lee and Terry reside in Clinton and have three sons and one daughter-in-law: Atticus (26) and his wife Rachel; Davis (25) and youngest son Avery (18.)

They attend Second Baptist in Clinton.