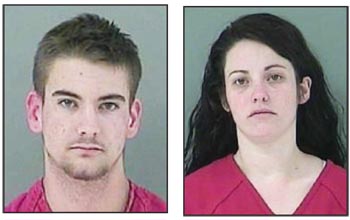 It might have been a routine traffic stop for not having working taillights.

But then, Anderson County Sheriff’s Office Deputy Kory Blevins said the driver of a Corvette with no working taillights and only one headlight didn’t pull over. He sped up and led deputies on chase that started on Clinch Avenue and ended on Fox Lane.

When Elliott reached the end of Fox Lane deputies were able to box him in, with Blevins pinning the driver’s door shout with his cruiser. Once stopped Blevins’ report stated that Elliott was reaching for something inside the vehicle.

Blevins reported he was shouting at Elliott to “show his hands” and that when Elliott refused he hit him in the face.

Once the duo were taken from the car and handcuffed Blevins said he recovered a bag thrown from the Corvette as it sped down Fox Lane and found a jar of marijuana, marijuana in baggies — apparently for resale — and digital scales.

What deputies say they found inside the car was more drugs.

Blevins’ report stated deputies found two loaded, semiautomatic pistols, each with a round chambered, on the passenger side of the vehicle, and a loaded .38-caliber revolver under the driver’s seat. Additional ammunition for the .38 was also found.

Blevins’ report stated he believed that was what Elliott was reaching for once the Corvette had been stopped.

In the center console of the Corvette, deputies reported finding a small plastic baggie with what is believed to be meth inside, and a larger bag containing around five grams of suspected meth shoved between the console and the driver’s seat.

After being read her rights, the report said, Floyd admitted to hiding drugs in her body. At the Anderson County Detention Center a bag containing what appeared to be more than five grams of meth was taken by a female corrections office.

The drugs were sent to a TBI lab for testing and the car confiscated.

The Tennessee Highway Patrol was called to investigate the wreck involving the patrol vehicle and the car driven by Elliott.

Elliott was carged with two counts of the manufacture/delivery/sale or possession of a controlled substance and one count each of reckless driving, reckless endangerment, evading arrest, possession of a weapon during the commission of a felony and possession of drug paraphernalia.

Floyd faces two charges of the manufacture/delivery/sale or possession of a controlled substance and one count each possessing drug paraphernalia and possessing a weapon during the commission of a felony.