Who’ll lead the fight against opioids?

County has options in legal dealings with manufacturers 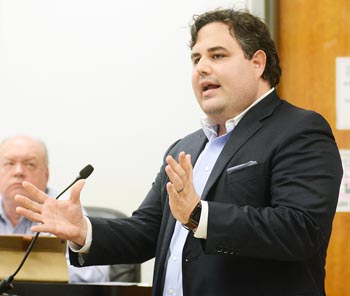 With the discussion of sexual harassment allegations tabled at the advice of outside legal council, the Monday night County Commission meeting shifted in a different direction.

A hefty portion of the meeting focused on revisiting a motion that was tabled in the last County Commission meeting.

It was the decision to retain Lieff, Cabraser, Heinmann, and Bernstein to be its attorneys in the ongoing opioid litigation.

County Mayor Terry Frank noted a quote from an article written by the National Association of Counties.

It read, “To have an advocate for your county in that resolution room, you’ll have to file a lawsuit. That protects your counties interest.”

Johnathan Taylor, a representative of Lieff, Cabraser, Heinmann and Bernstein, addressed the Commission, reiterating how important “a seat at that table is.”

He also stated that the federal opioid case litigation is now moving at a “feverish pace,” making the Commission aware of the necessary urgency. He also made the commission aware that large settlements are in the works.

Lieff, Cabraser is one of six or seven law firms in the country to have a seat at the settlement table in Cleveland, Ohio.

Scott County and Campbell County are two East Tennessee counties that have filed lawsuits in federal court on the matter, breaking rank with their local District Attorneys.

“Everyday that passes by is potentially a day that the county misses out on a statute of limitations claim. The time is now.” Said Taylor.

“The issue isn’t that Anderson County isn’t doing anything, the problem is the cost of combatting this epidemic,” said Taylor. “This is an attempt to recover all of those cost from the past and all of the costs in the future.”

The commission then heard from Dave Clark, District Attorney General in the Clinton Criminal Office.

First are the efforts of Attorney General Herbert Slatery, which really isn’t up to the County.

“The thrust, as it’s related to me by General Slatery, of their action is injunctive in nature to try to stop the sale of drugs in Tennessee. That’s great. But in my view, that alone is inadequate,” said Clark.

He cited the Drug Dealer Liability Act as something that has allowed attorneys to hold manufacturers responsible based on their market share. It puts liability on companies selling drugs. For example, if you hold 20-percent of the market share of Oxycodone, you are 20-percent responsible for the damages.

It is the Attorney General Slatery’s intention, if they recover money, to divide that money into three pots.

One pot is to pay for an unspecified group of remedies such as extra incarceration or treatment.

The second pot would be to offer that money to counties and other local governments who could opt in or opt out of recovering that money.

The second option he offered the Anderson County Commission was filing their own lawsuit. Clark stated that he believed that this was not the correct course of action for Anderson County.

The last option he offered was the lawsuit that the district attorney has filed.

He cited that this path is the most widely chosen path by other counties in East Tennessee.

“There is not a ‘we want all the options’ choice,” said Clark. “We cannot have a ship with two captains.”

“I would caution not to be swayed by a manufactured sense of urgency. This is not a sale on clothing that ends at the end of the week. We are prepared for this to take five to 10 years.”

“We are going to keep talking, because we have the same interests. Irrespective of our different view on how to get there, at least for the people of Anderson County, we are trying to do as much as we can for the people of Tennessee,” Clark said.

He again reiterated his warning to be weary of a “sales pitch with an urgency attached to it.”

In the end, the committee denied the resolution.

In the midst of all the talks of the awful opioid related issues, Commissioner Steve Mead informed the Commission and attending body that the number of opioids prescribed in Anderson County last year was down 35-percent.