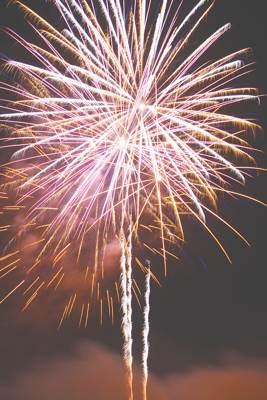 There are events spread throughout the day on the 4th of July.

to celebrate the Fourth in Anderson

The City of Clinton 4th of July celebration

The fireworks will have music coordinated with the show and may be heard on AM 1380 and FM 101.1 WYSH Radio.

water slide with slip-n-slide, race car combo with water slide, human hamster balls, pirate bounce house, and “trackless train” that are available for the public with no charge (you must have a wrist band to ride).

There will be a game setup for video games for those kids looking for video game excitement witih no charge. (Sponsored by Faith Promise Church-Anderson Campus).

Truck, and Sweet P’s Snowcones will be setup in the Lakefront parking lot by the Tennis Court area.

“John Fee & Honky Tonk Playboys” and “The Parrott Brothers” will be playing from 5 – 9:45 p.m., sponsored by Ray Varner Ford and The City of Clinton. The music will be setup on the women’s field at Lakefront Park.

There will also be antique cars for show from The Clinton Chapter of the Antique Automobile Club of America.

the day with the Firecracker

Later the children’s Dog Show will be held on the Norris Commons, followed by the one-mile Fun Run. No one will want to miss the children’s Wheel Race, the Bicycle Parade, the Water Balloon Toss or the Water-

There will be sack races and duck races, too. One of the highlights of Norris Day is the barbecue dinner — barbecue pork and chicken with all the sides served by the Norris Lions

Club in the Norris Middle School cafeteria from 11 a.m.- 2 p.m. Norris Day will conclude with a fireworks show.

The City of Rocky Top presents

its 2nd Annual 4th of July Bash in Memory of Tiny Houck.

Once again, the City hopes to bring the community together for a day filled with fun and excitement,

which will begin with a Kids’ Parade. Kids of all ages can decorate non-motorized bicycles,

wheelchairs, or just simply march through the parade to the ball field. Registration for the Kids’ Parade begins at 1 p.m. in the parking lot of SunTrust

Bank and kids will march down Main Street to the Ballfield,

where they can play the rest of the day away.

There will be bounce houses, an even larger water slide, obstacle

There will also be new food vendors and food trucks, and the Matthew Hickey Band will be playing from 8 p.m. through the end of the fireworks show, which will begin at approximately

City Hall will host a car and motorcycle show from 2 – 8 p.m., and Knoxville Harley Davidson

The Oak Ridge Community Band will put on a concert followed

Bring your lawn chair or blanket for outdoor seating. Concert begins at 7:30 p.m. and is a free concert but donations are gratefully accepted to help offset expenses. Fireworks will begin at dark, around 9:45 pm. The concert and firework show will take place at A.K. Bissell Park.

And if that’s not enough, there’s an anvil shoot at the Museum of Appalachia.

Anvil shooting used to be a fairly common way that rural

Christmas, and even Davy Crockett’s election to the U.S. Congress. Some years ago, two men, each more than 100 years old, watched the Museum’s

anvil shoot and recalled this tradition from their early boyhood. The Museum of Appalachia

Day by launching a gunpowder-

filled anvil high into the sky. “Anvil shooting” was once a common way for pioneers to celebrate special events.

The anvil shoot is the centerpiece

of a celebration that includes