Hawks open with shutout of Loudon 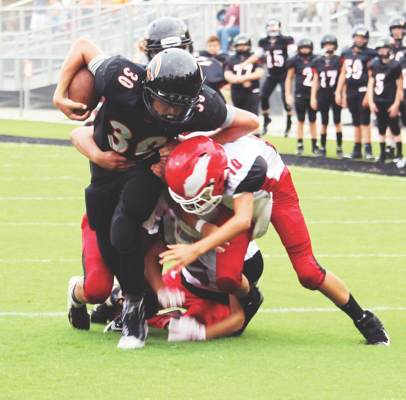 The first quarter saw both teams exchange possessions and field position. Both teams suffered through the typical first game problems as penalties helped killed drives for Clinton and Loudon.

Early in the second quarter, the Hawks took possession at their own 44-yard line after forcing the Redskins to turn the ball over on downs.

At that point the legs of Andrew Meier, along with the blocking up front of Caleb Cook, Tommy Clark, William Taylor, Bull Goodman, and Riley Webb, took over. The Hawks marched 56 yards in 10 plays. The drive concluded with a one-yard touchdown plunge from Meier.

Quarterback Ethan Tinker then completed a pass to Dawson Woodard for the successful two-point conversion to make it an 8-0 Clinton lead with 6:11 remaining in the first half.

It looked as though Loudon had an answer as they mixed short passes with their running game in a six-play drive to take the ball down the Hawks’ 10-yard line. On third and long, a fumble was recovered in the backfield by Clinton’s Chase Glandon to kill the drive.

The Hawks put together a promising drive that was highlighted by a 60 pass from Tinker to Meier to bring up a first down at the Loudon 22-yard line. The drive ended on the next play with an interception.

The Redskins offense was thwarted by the Hawks defense once again as Chandler Smithwick dropped a ball carrier for a big loss and the duo of Meir and Glandon recorded sacks.

Clinton forced a turnover on downs and ran out the clock to end the half and took their lead into the locker room.

The Hawks opened the second half with promise as Travis Jackson returned an attempted onside kick 13 yards to give Clinton the ball at the Loudon 47-yard line. The drive stalled at the Loudon 32-yard line and the Hawks turned it over on downs.

The Clinton defense again rose to the occasion as Camden Leon intercepted a pass to give the Hawks the ball at the Loudon 36-yard line.

Clinton moved the ball to the Loudon 15-yard before penalties pushed them back to the 28-yard line where they turned it over on downs.

The Hawks’ defense held once again as Cook and Javon Rodd sacked the quarterback and helped force a turnover on downs at the Loudon 28-yard line.

Meier ran in the two-point conversion to give Clinton a 16-0 lead with 4:11 left in the game.

The Redskins had the ball for two more possessions but turned it on downs after four plays each time.

Following the game, head coach Eric Woodard was pleased with the effort of his offensive line.

“We ran the ball well. It’s probably going to be our strength this year. We’ve got a pretty good group coming back and we’re going to try to be a power football team,” he said.

Woodard also addressed the occasional sloppy play of his team in the first half.

“This game was supposed to be played on Sept. 6 but there was a conflict because Clinton plays Anderson County that night so we played a week early. We needed that extra week to fine tune but the kids played well and overcame it,” he said.

Meier led all rushers with 124 yards and one touchdown on 22 carries.

The Hawks return to action on Thursday when they host district rival Robertsville at 7 p.m.