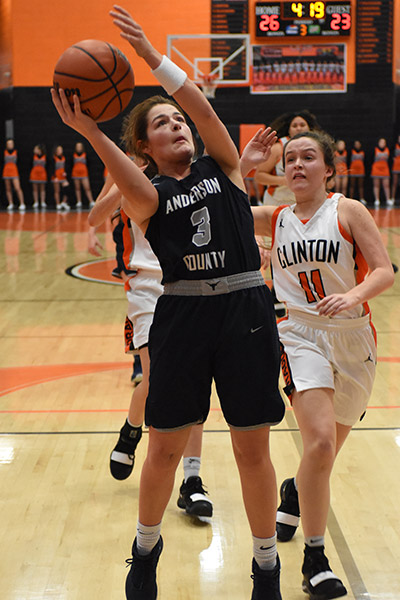 Clinton’s Danyel Joy (11) tries to chase down Anderson County’s Maci Houser as Houser goes up for an easy bas- ket Friday night. The Lady Mavs pulled off a semi-upset at the Donny Dome against the Lady Dragons. (photo:Conner McCarty )
“Clinton doesn’t like us, and we don’t like Clinton,” Anderson County senior Maci Houser described the occasion bluntly, yet perfectly.

With last Tuesday’s lack-of-snow day, Friday evening’s District-3AAA rivalry contest was focused on, by both schools, for a week.

The Donny Dome at Clinton High School was full, and the fans were treated to a matchup that is always and will always be important to both schools. The cross-town showdown was an entertaining, yet close affair for three quarter.

However, the Lady Mavs would use a fourth quarter surge to create enough distance needed for the victory.

The Lady Mavs would take an early lead in the rivalry matchup, with an 8-2 run. The Lady Dragons would answer with a 6-2 run of their own. However, Maci Houser’s six first quarter points would lead Anderson County to a 10-8 advantage heading into the second quarter.

Both teams battled back-and-forth throughout the second quarter, countering each other’s blows. Clinton’s Sarah Burton would knock down two from downtown — leading the Lady Dragons with six second quarter points. Opposingly, Brooklin McCoy would lead the Lady Mavs with her five second quarter points. Neither team could pull away from the other in the first half of play. Both teams would put 13 points on the board in the second, but Anderson County would head into halftime with a 23-21 lead.

The third quarter would be low-scoring, yet close. Nikki Jones led the Lady Dragons with five of their seven third quarter points. However, after a timeout, the Lady Mavs grouped defensively, and were able to hold onto their slim lead. Jayce Braden’s four points would all come in the third quarter—a good time, considering their struggles offensively during the quarter. Braden scored half of Anderson County’s eight points and the Lady Mavs took a slim 31-28 lead into the fourth quarter.

After a low scoring third quarter, the speed of play increased, and the lid would come off the basket for both teams in the final quarter. “In the fourth quarter, we huddled up, we got together and talked about how we had to win—it’s Clinton — and how we were sick of (the score) being close,” said Houser. That huddle worked, and the momentum favored Anderson County after the Lady Mavs stretched their lead out to eight points, 44-36, with just under two minutes left in regulation — the largest lead of the ballgame.

With the clock against them, the Lady Dragons were forced to foul throughout the last minute of the game. Clinton remained within reach as the Lady Mavs made only four of their 12 free throw attempts in the fourth quarter.

Yet, Clinton failed to go on a late-fourth quarter run, and the Lady Mavs would hold on for the win.

The Lady Dragons were led by senior guard Nikki Jones, who finished the contest tied for a game-high 17 points. Jones would score ten of her 17 points in the fourth quarter.

The Lady Mavs were led by senior guard Maci Houser, who also finished tied for a game-high 17 points. “Before the game, my mom told me to play with my heart, so that is what I did,” said Houser. Senior post Brooklin McCoy would also hit double-digit scoring, as she put up 13 points.

Anderson County will finish up their regular season this week, with a trip to Halls on Thursday night, before their season finale at Oakdale on Friday night. Houser and the Lady Mavs hope to use the momentum from their win last Friday night to get some wins this week and carry that momentum with them into the District-3AAA Tournament.

Also, with the win over their rivals, the possibility of the Lady Mavs stealing the District-3AAA four-seed from Clinton still remains. The only way that happens: Anderson County must beat Halls and Clinton must lose to both Campbell County and Powell. With district tournament seeding on the line this week, winning is imperative.