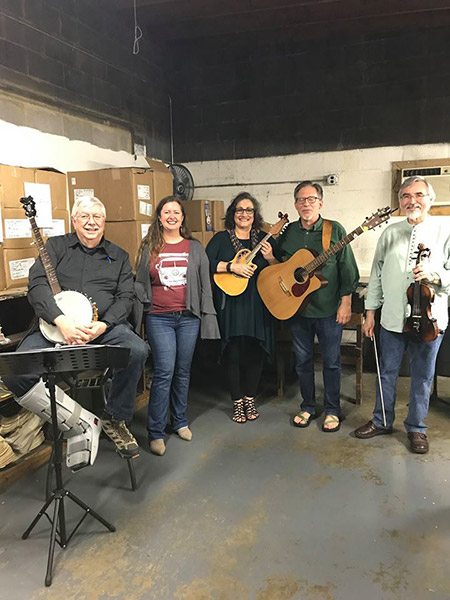 The Missing Goats
A love for Ireland and a passion for music brought the four members of The Missing Goats together. Former Oak Ridge Mayor Tom Beehan, who is now semi-retired, has played music “forever,” he said, but he only joined Mary Tuskan and Steve Reddick around six years ago.

The trio played together as the Ridge City Ramblers, along with a few other musicians. The Missing Goats debuted in February 2018 on St. Patrick’s Day in Oak Ridge.

Chip Bailey, former Dean of the School of Business Administration at South College, joined the band less than a year ago.

“We found Chip hanging out on a street corner with a fiddle in hand,” Reddick joked.

Reddick has taught eighth-grade American history at Jefferson Middle for 35 years, and Tuskan is a school counselor at Clinton High. She is also the music director at St. Therese Catholic Church.

Reddick spent a year in Ireland when he was in college, which gave him a lifelong love of Irish music. He met Tuskan when she was in a band called Shamrock Road.

“I was sitting out in the audience and I was the only one that knew all the songs,” Reddick said.

Later on, he joined Shamrock Road.

They visited Ireland together last year and played at pubs for seven nights in a row. They play traditional Irish tunes, but also some Americana and bluegrass.

“And American folk has been popular in Ireland since Bob Dylan,” Reddick added.

The Missing Goats from The Courier News on Vimeo.