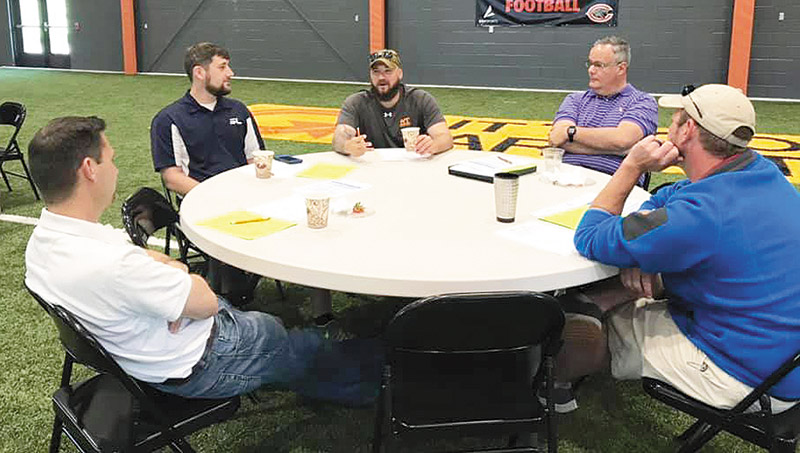 Team members learn to pool resources and ideas during Leadership.
People are interesting.

No exceptions. That was evident during the first couple of days of Leadership Anderson County. While I generally hate team building exercises and icebreakers — I’m a lot of fun, I know — the ones planned by coordinator Marsha Stapleton really did help everyone get comfortable with each other.

I found out, for example, that Kala Hill, who works for Powell Clinch Utility District, was a contestant on Jeopardy. She lost when she couldn’t solve the puzzle “gooey brownies.” She’s a kind, caring person, and her leadership/personality test reflected that when we got our results from life coach Chuck Carringer.

I also discovered that John Montecalvo, who spent eight years in the military, is a natural leader. During one game called the helium stick, all team members had to place two fingers under a tent pole and lower it to the ground.

No. It was stressful and annoying. I yelled at Anderson County Schools Communication Director Ryan Sutton. I had to apologize later. He was fine.

See, yelling at people isn’t a good leadership style. It can be effective at yielding results, sure, which is what my personality type wants, but it doesn’t create happy employees or content teammates.

Montecalvo, on the other hand, raised his voice over the sound and fury of all his other teammates and didn’t stop until everyone just fell in line.

The test we did with Carringer was the DiSC assessment. It determines whether your main personality trait is dominance, influence, conscientiousness or steadiness. The Ds are results-oriented, strong-willed and direct. The Is are outgoing, enthusiastic, optimistic. The Cs are analytical, private and systematic. The Ss are even-tempered, accommodating, humble and tactful.

And each style has influences from the other styles. Montecalvo, for example, is an ID. He’s people-oriented and results-oriented. So it’s natural for him to lead people to get to his goal. A straight D, which is what I am, tends to work alone to get results quickly. An S, like Hill, often plays a supportive, patient, dependable role. Her steadiness helps keep a plan going.

Another teammate, Scott Lane with ORUD Gas, is the type to plan and analyze — the C personality type — before going into the nitty gritty of the work. He would strategize.

Carringer used all that information about personality types to educate us on leadership. How does our personality type lead, and how do we effectively lead others with very different personalities? What are the common needs of employees or team members? If you are a conscientious, detail-oriented C, how do you relax enough to let an outgoing, big-picture I get their work done without wanting to micromanage him or her?

We also spent a lot of time learning from United Way Executive Director Naomi Asher. If I were to guess, Asher is an ID, like Montecalvo. But it’s hard to know for sure because she’s also very detail-oriented. She’s also very supportive, like an S, and empathetic.

What even are you, Naomi?

I personally really came to admire Asher not only for the work she does in the community, but the heart and compassion she pours into her work. She taught our class about the mindset that comes with poverty and how to understand folks who are in survival mode.

This session got a little bit tense. Questions rooted in stigma associated with people living in poverty were asked, and defenses were up. No one really likes to think they might be wrong, and so when classmates were confronted with facts that contradicted long held beliefs about why people are poor, it got uncomfortable.

I’m not even sure everyone noticed. Those of us in the class who have experienced poverty noticed.

I spent a lot of time after the two-day orientation thinking about what we learned. It was a lot to unpack and process, and I applaud the organizers for putting together such a great combination of education, fun and team-building.

I’ll bring you more news from the leadership trenches in late June.