When you have to make up a word for it, you know it’s all good 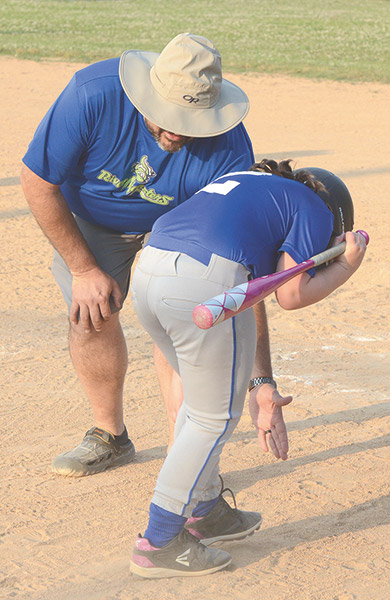 Coach Charlie Goins in the 8-Under league gives a “low-five” to McKinley Phillips as she heads back to the dugout Monday night. The “low-five” is the new “high- five” and designates “well played.” (photo:Ken Leinart )
You get reminded every once in a while that it’s not really about winning or losing.

Sometimes it’s as simple as having a little fun.

Monday night Clinton Girls Softball did just that — in the second game of the day’s twin-bill.

A team couldn’t make it for a 8-Under game and so the coaches just decided to have a little informal scrimmage.

Hey, as long as the kids are playing ball, right.

What you might not understand is that the players on these teams — 6-Under; 8-Under; 10-Under; 14-Under players will take up a good chunk of roster pace on area middle school and high school softball teams in the future.

But ask yourself this: Why does a grown up spend hours and hours and hours of his, or her, free time volunteering to coach and guide little wanna-be athletes — because at this point in these smallish and youngish people’s lives, that’s all they really are.

Some of them can’t speak and walk at the same time. Some of these athletes have a hard time figuring out where some of the sports equipment should be worn. A lot of these kids don’t even know who Carlton Fisk, Joe Jackson, or (my old teammate in high school) Ughhoh are.

They may know who today’s sports stars are — and I do mean “today’s,” but they haven’t learned why these sports are so fun to play. Not yet.

Ever seen six-year-olds play football? It’s bumper car racing. Have you seen the higher level of youth football play — Midgets (I’m not sure if that’s right)? Skills start coming out.

But from the youngest to the oldest in youth sports, whether that be football, baseball, basketball, or softball (which reminded me Monday night), there is something happening.

I’d have to make up a word for it because there is nothing, and I mean nothing, that compares to it.

During “Studinfreck” kids learn about sportsmanship, about respecting teammates, about having fun,

During “Studinfreck” kids learn they need to listen to a coach and that its’ okay to ask a question if they don’t understand.

“Studinfreck” means kids dedicate themselves to a sport … To a point. Fun first and if they really shine at whatever they are playing at, then it’s okay to “compete.”

And there is a difference.

When you compete it gets a little more serious, the goals are a little higher, and the dinosaurs a little faster.