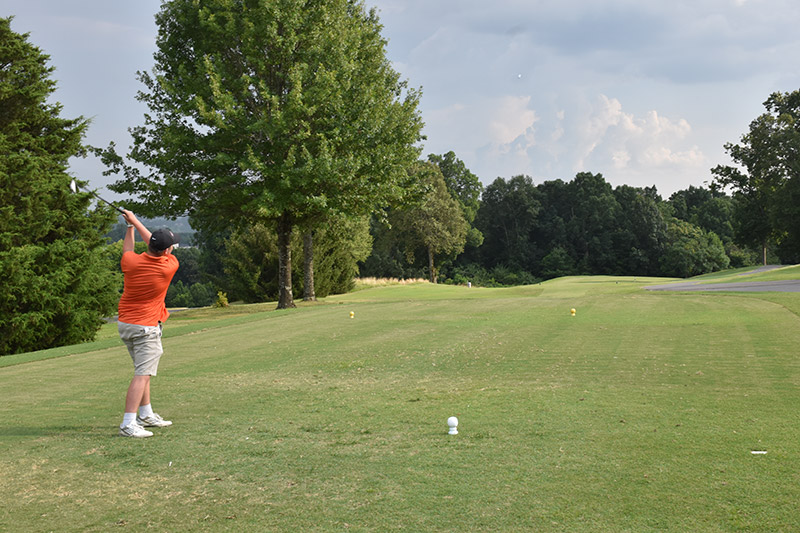 Three schools gathered at Three Ridges Golf Course in Corryton on Monday, July 29, for the first official tournament of the season.

“A school a ridge,” one student joked.

The head coach of Union County, Gary Chandler, briefly addressed the players and parents, thanking them for coming and kicking off the season. After, he assigned the players to their groups, and the groups to their starting holes. Three-by-three, their golf carts buzzing through the late afternoon, the players spread out across the front nine, and the game began.

The rule was triple bogey maximum. If any player went three strokes over par, they were allowed no more strokes on that hole and picked up their ball. Close to six or seven students had already picked up their balls before they reached the putting green of ninth hole. In one group, only a single player got all the way to the hole, the other two having bogeyed before making it to the green.

Close to an hour into the match, dark clouds and a wall of rain began rolling across the hills from the south. For the entire rest of the match, rain came and went, but the players didn’t seem to mind. If they did, they refused to show it. If anything, they were grateful for it, if only to drive off the afternoon heat.

At the end of the game, the players handed their score-cards in and the coaches huddled together around a small table to compare. Clinton’s boy’s team came in with a solid total of 204. The top two players for the boys were team captains Dallas Cole, with a score of 44, and Trace Duncan, with a score of 43.

Head coach Matt Cain said he was proud of the two boys.

“They lead the boys team, and they’ve been great examples. Just practicing and playing as much as they can.”

Sophie Seivers scored a very respectable 48, but the standout of the whole tournament was Clinton Sophomore Riley Scarbrough, who came in at an amazing 42 (only six over par).

“She’s played in tournaments this summer and worked a lot on her approach. She works extremely hard and she has the right mindset to succeed. I mean, she’s the youngest person [at the tournament]. She’s got a lot of brightness ahead of her,” said Cain.

Cain said he was just happy the girl’s team performed at the level they did against the competition.

“Campbell county’s girl’s team is a really good team, and we worked really hard to compete against them,” said Cain. “It was just nice to see the hard work pay off for the players.”