CAK passes its way past Clinton

Dragons own the ground, but not the skies 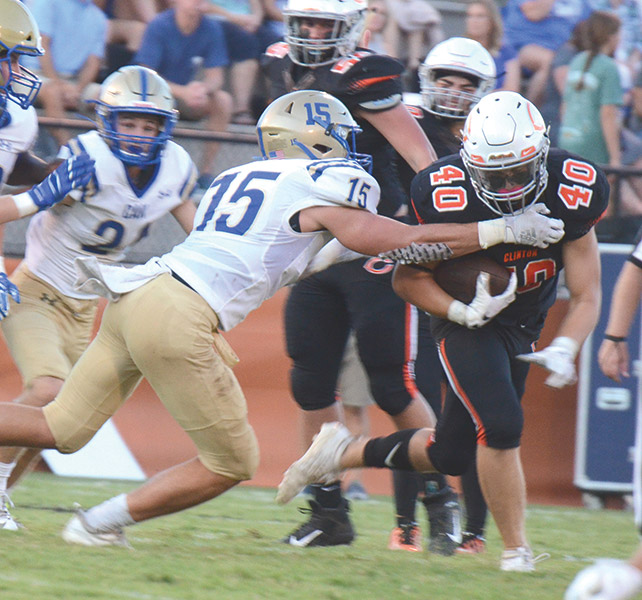 Clinton’s Conner Moody breaks outside on the CAK defense Friday at Clinton City Field. (photo:Ken Leinart )
There was a lot of good on the part of the Clinton Dragons at City Field Friday night.

And there was just enough that wasn’t so good.

The visiting Christian Academy of Knoxville (CAK) took a 24-14 win from the Dragons.

“That was a frustrating one to lose,” Clinton Head Football Coach Randy McKamey said. “We moved the ball well, but we shot ourselves in the foot a couple of times.”

The Dragons did what you expect them to do, and them some. The Dragons ran well, played a flying, all-out defense that made some nice adjustments throughout the game, and CHS even threw the ball well.

But two passes from CAK’s Ryan Degges to Grant Sterchi nullified a lot of the good the Dragons had accomplished.

“But there’s no quit in them and that’s a good sign,” McKamey said.

But he added the Dragons need to accept the fact they are as good as anyone else once they get on the field.

The first CAK hookup came on a fourth down in the first quarter. The Dragons had adjusted to the Warrior’s short passing game and were keeping gains to a minimum.

CAK’s first drive shaped up much the same way. In that one the Warriors coughed the ball up on downs.

The second time around Degges found Sterchi for 23 yards and a score. Clinton had three players around the ball, but the tall, lanky Sterchi simply outjumped the defense.

That first down set up CAK’s first score, coming at 2:40 in the first quarter.

Clinton tied the game in the second with a short drive and a 27 yard pitch, catch, and run from Jacob Brock to Evan Winchester. Noah Grumbach’s kick made it 7-7 with 4:36 left in the half.

CAK answered in short fashion when Degges again found Sterchi for 17 yards in the middle of the filed. Sterchi, however, turned the 17 yard catch into a 59 yard touchdown after slipping between two defenders.

With a little less than two minutes left in the first half the Dragons found themselves deep in their own territory and punting. CAK looked like it was going to make a serious threat for another score, but Trent Herrell tipped a Degges pass, Blake Cooper nabbed the interception, and it was the Dragons making a move to score late in the first half.

The Dragons gobbled up chunks of yardage pounding the middle of the field, used their time outs wisely and with 16.2 seconds left in the half notched the score on a Cooper run from one.

CAK thought about using the final ten seconds to set up some scoring magic, but Cooper picked off his second pass in the span of five minutes and the score stood at 14-14.